In France, one must always eat dessert. Mine is pictured below, followed by a pastry of tabs drizzled in a sauce of commentary. 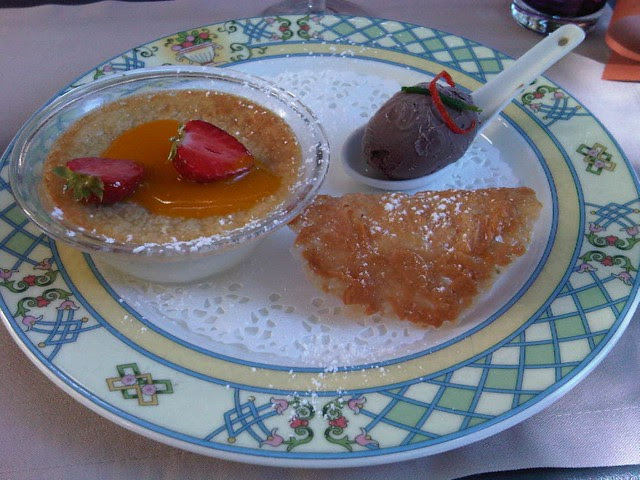 Da Coach doesn't approve of "sensitivity" training for the New York Jets. Me, I just wonder if it will lower their T-levels.

I just learned that back in June the Business Roundtable produced a lengthy letter to Peter Orszag (then Director of OMB, which is not to be confused with OMG) detailing the manifold ways in which regulation or the threat thereof have stifled business. Here's the link to the 54 page pdf, which I hope to read and digest for you at some point.

One of those many burdens is the ridiculous requirement in the Obamacare legislation that businesses issue countless zillions of 1099s to virtually everybody they buy something from. Talk about your dead weight cost to the economy. Well, the Democrats who voted for that disaster are now claiming that they did not know it was in the bill. Next thing you know, they'll be claiming that they did not know health care reform was in the bill. Dudes, if ignorance of the law is no defense, ignorance of the bill doesn't fly either.

Foreign Accent Syndrome: Not as funny as you'd think.

Remember that Indian professor whose arm got chopped off by jihadis for posing an exam question they did not like? Turns out the question was just non-substantive text designed to test punctuation.

The new tough bank capital requirements of Basil III are going to lead to higher interest rates for bank loans. Well, obviously. Equity costs more than debt and deposits, so if you are going to require banks to put more equity behind every loan, their costs are going to go up. Those higher capital requirements may indeed be necessary, but there is no arguing that they are wind in the face of our current monetary policy.

Yet another chickengreen unmasked. Not that I'm all let's-strip-mine-the-Rockies or anything. Here's some recycling I could get behind.

Lady with the French accent is 49 years old? She looks like she been rode hard and put away wet too many times!

*stares at the picture*


(I'm not much for recycling, but I'm very big on reuse or re-purposing. Why go through the waste of using something like it's a raw resource when you can just use it, like that desk?)

Mitigating the Jets offensive behavior, or at least understanding it, one need only look at Ines Sanz costume when she waltzed into the locker room. I myself wouldn't have been staring, whistling and trying to attract her attention but that's only because I'm 53 years old and slightly befuddled.