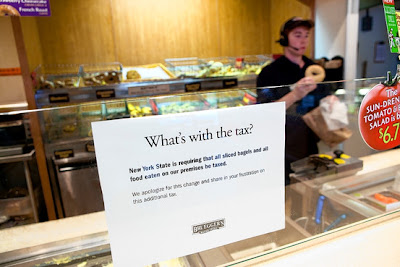 Our "public servants" prefer to hide taxes so that they can spend our money without paying a political price. Everything from paycheck withholding to the absurd corporate income tax to undisclosed business-to-business taxes hide the true extent of taxation from the average voter. It is therefore a good and wonderful thing that this business, at least, is deflecting the irritation over a new tax (in the guise of an interpretation of existing law) toward the responsible officials. More businesses should do the same.

Service stations in our area used to list the gasoline taxes so the citizens could be informed. It was a great idea and something that all stores, merchants and busiensses should emulate.

One missed opportunity - Imagine if the bottom of this sign said, "And by the way, go to www.bruegers.com (or whatever) and click the big flag icon to go to this page where you can register to vote in New York".)

No hint whatsoever of who to vote for or which party to register for. None would be necessary.

Just the idea of it would speak volumes.

The people at the store voted the people that tax them into office. Why are they complaining.

tyree, I have often said that the gas stations should place the city, county, state and federal taxes on each pump. Inform the people.

I think there should just be a single flat tax on one's personal income. Even if that one was higher than what we're used to, it would help do without all other taxes which are effectively just taxing what you already taxed at least once. I am aware of the fact that there would be so much savings on bureaucracy that a couple thousand governmental employees would probably have to be released, but everything would just be so much simpler.