The latest news out of Gallup (which puts the Republican lead on the November "generic ballot" at an unprecedented 10 points, well ahead of the Rasmussen tracking poll) inspired me to check out the current pricing on the Iowa Electronic Markets for "Democrats Hold" contracts. (For those few of you who do not know, the Iowa Electronic Markets are actual futures markets on which people may buy contracts that predict the results of elections.) Based on trading that occurred, I believe, before the publication of the Gallup poll, the IEM have swung dramatically in favor of the Democrats losing the House in November: 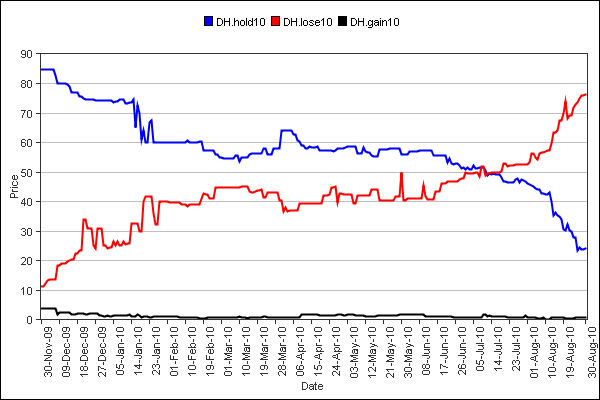 The Senate, however, is an entirely different matter. 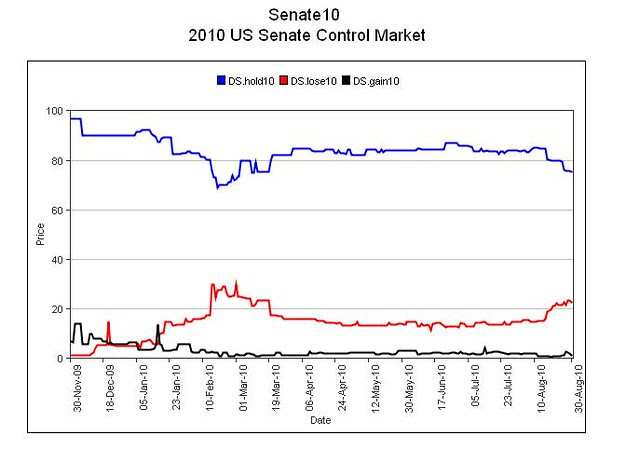 A little divided government would do us all some good. Perhaps even Barack Obama.

Yes but the Senate is where the judges come from

You're last sentence is a fair argument if you're only looking back to Clinton after '94 and his move to the center.

Do you really think Obaba, who most now agree is a stubborn socialist ideologue with move to the center?

Personaly I hope he doesn't move to the center like Clinton and continues to voice his true failed beliefs. One term for this ideologue is enough.

Obama's moving from Lenin to Trotsky would be touted by the Drive-By Media as "Obama's Move to the Center."

The Republicans should not want an overwhelming victory (like re-taking the Senate) in the Midterms this year. It would be much better to take only the House (and therefore, purse strings) and fight a stalemate action until they can run against Obama and the Senatorial majority *again* in 2012 and thereby claim the greater prize, the White House along with the Senate.

Also, it's less likely that Obama will go to ground and try to shed his skin for a moderate one if he only loses control of one chamber. If he loses both, he might just wise up and try to pull a triangulation. I think it would fail, but why take an unnecessary risk? (Clinton's approval rating on the eve of the 1994 elections was 46%; higher than Obama's now, but not drastically so)

The Republicans' best COA is to push hard only to take solid control of the House of Representatives, with a lesser victory in the Senate. Once that is accomplished, then try to rescue US finances their way (by cutting spending) and scream loudly and longly as the Senate Democrats and President fight them every step of the way. Imagine the optics of a Presidential veto against spending cuts for a bankrupt nation!

As things get worse (as they almost undoubtedly will; you can't just legislate away long term economic problems and all signs indicate we're on a long downward slope) they will still be able to put ownership onto the Democrats. That 'stimulus' will haunt them for a long time.

I think this long term result should be kept in mind when anyone sees online grousing about 'Why aren't the Republicans pushing harder in this Senate race or that Senate race?' that I've seen here and there, like at Ace of Spades HQ.