Yesterday morning, while determining that my prostate gland was, indeed, normal, my doctor -- who is arrestingly conservative by Princeton standards -- announced that he was recruiting his patients to attend today's Tea Party protest against Obamacare in Washington. I demurred notwithstanding my reduced leverage in that position, but did invite him to send along photos from the event. He reports a big crowd, and we note that the Donks seem to have caved on "deem and pass." Cause and effect? 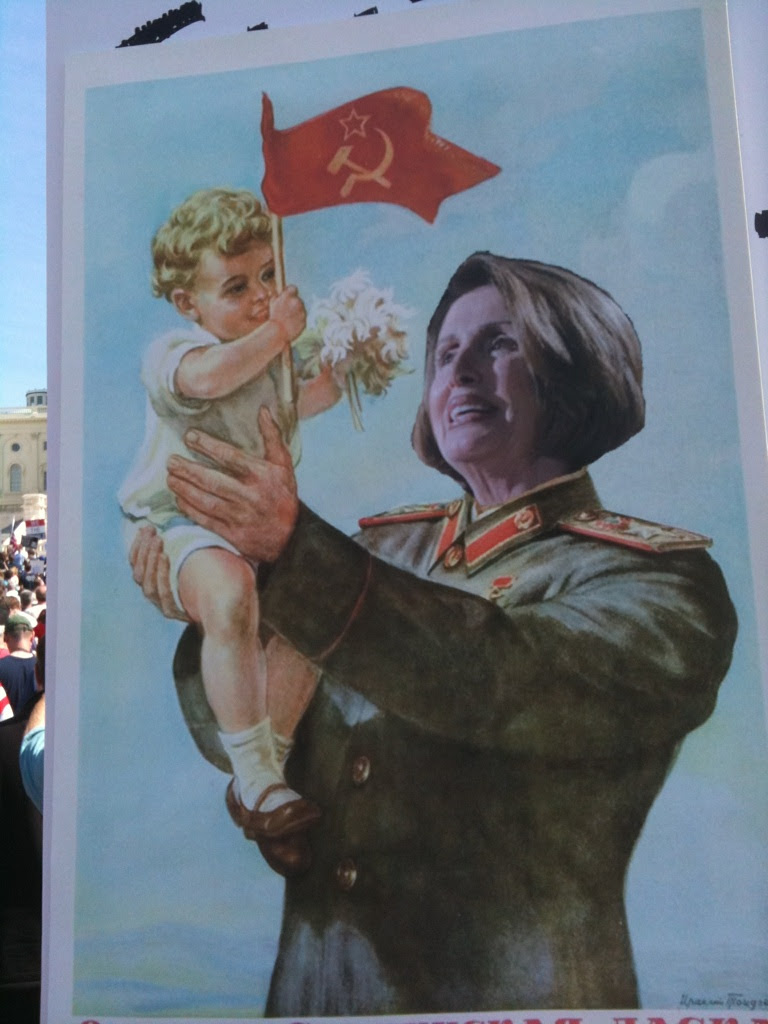 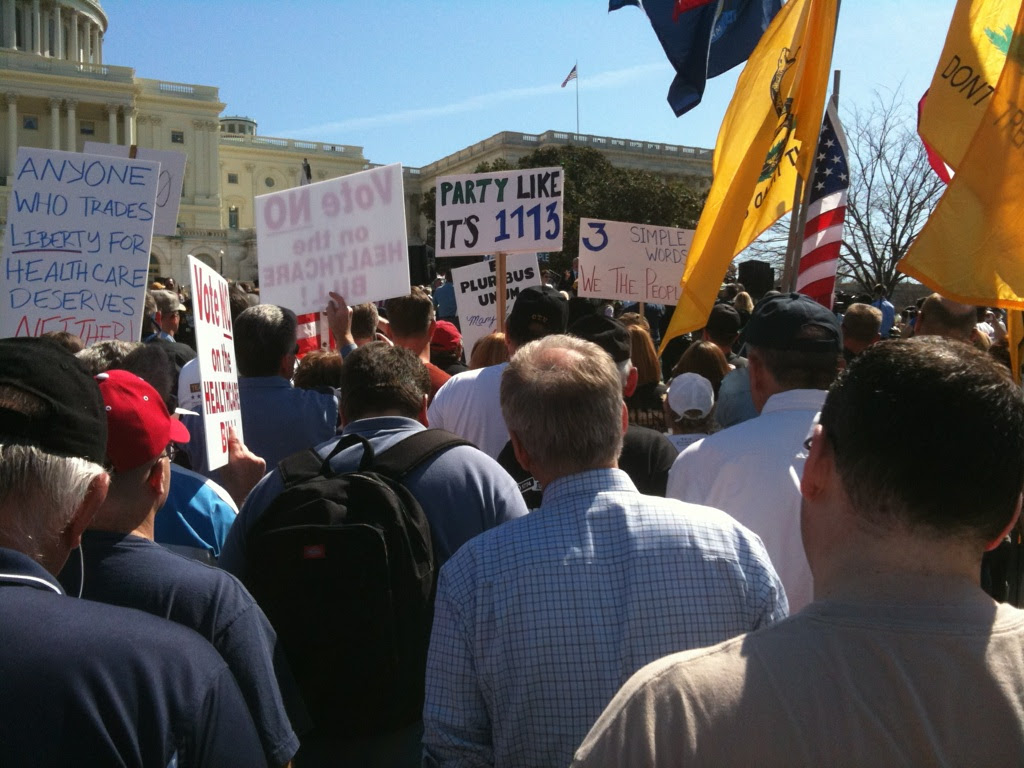 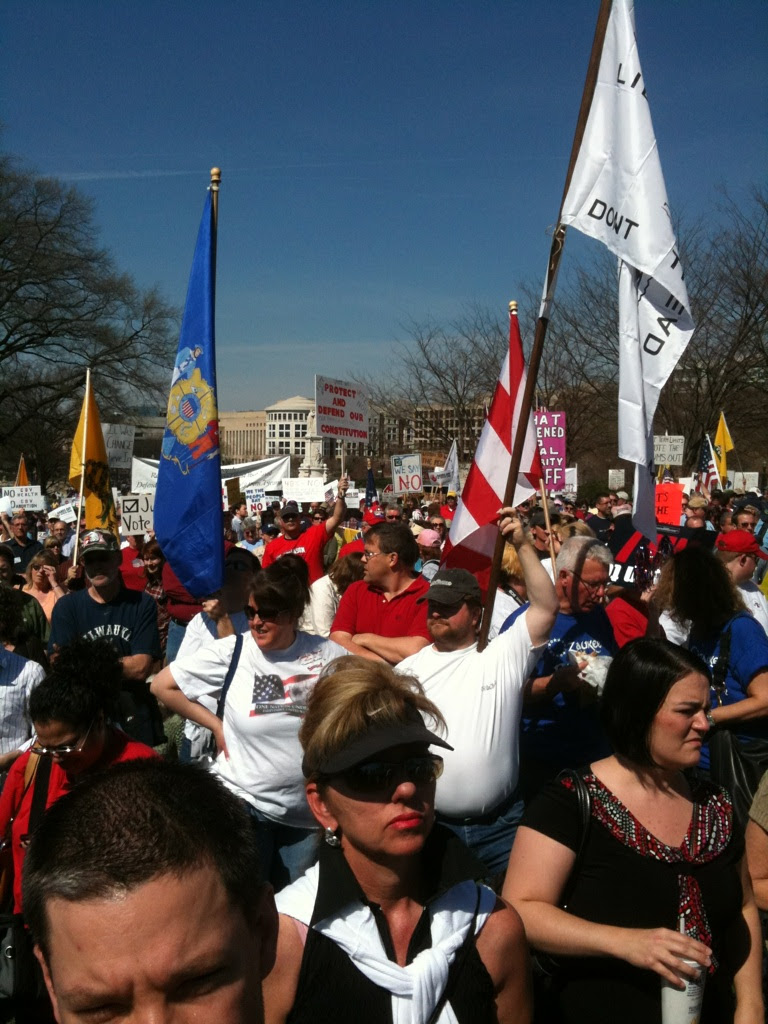 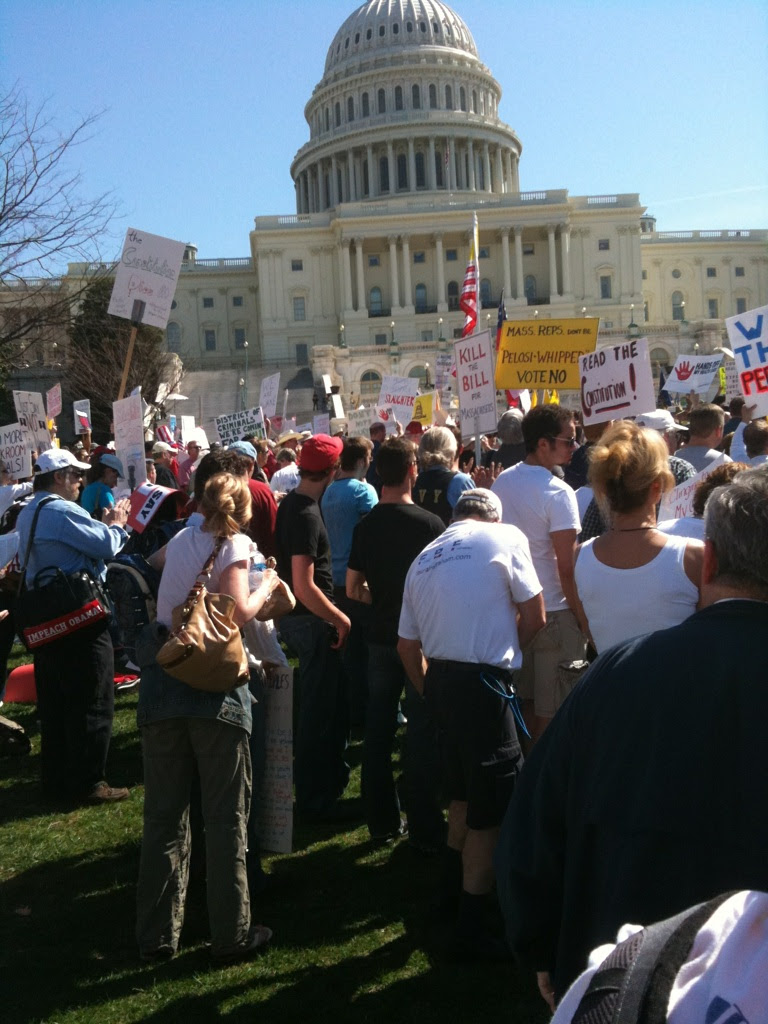 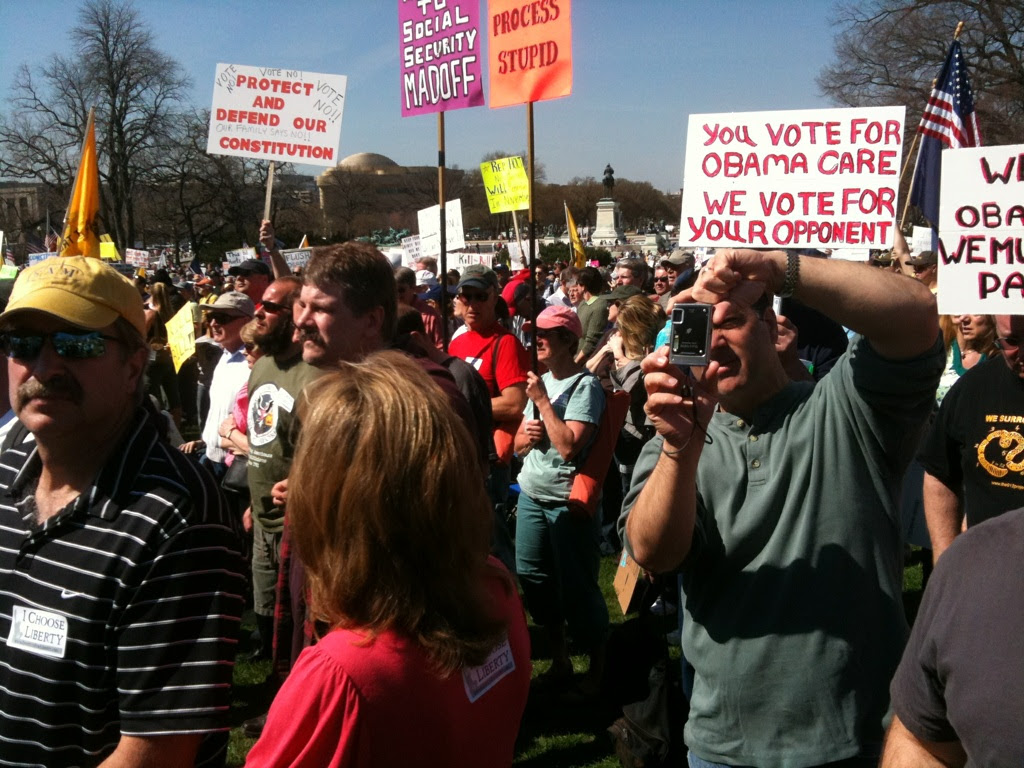 Space voting no – Melt the phones..

There are a lot of people, seniors, my mother-in-law, etc. that want to do something to stop this but don’t know where to begin (ie. they are not good with computer or are doing something ineffectual like calling the White House). We, the engaged, need to tell them how their voice can be heard in effective ways, using media they typically know about. Let’s face it, I doubt a lot of seniors visit, for example, Redstate.

Get on the compute at CNN, ABC, FOX etc and show them where they need to visit to get Congressional contact info. We need to show people how to express their frustration in ways the weasels in DC can understand. I visit hughhewitt.com for lists of DC and District phone numbers. I’m sure you all have your favorites. Get to work.

My kind of physician! Since I need a new doctor would you mind if I email you?

TH, of the photos on your flickr site that this guy sent you, I thought that this one was the one that stuck out the most.

What a couple of douchebags.

Yeah, I decided not to post that one for all sorts of reasons. Now that you make the point, I'm going to take it off the flickr feed,too.

Funny...nobody seems to be demonstrating FOR Obamacare...outside of invitation-only Obama rallies.

Bring down the economy with it...YES WE CAN!!

Looks like a small group of middle aged white people in great need of a little exercise. I bet the healthcare bill will help them.

Teabaggers all. And i do mean it in the most derogatory way.

Small groups, decidedly white, with an ax to grind. I am not in favor of Obamacare but these people represent, to me, the fringe of America. The Michelle Bachman, Sarah Palin, Tom Tancredo supporters represent the lunatic fringe of the Republican Party.

IF you want a revolution and new representation in the house and senate, find some new standard bearers. These people and the teabaggers are frightening to most of is middle of the road, middle americans.

"Looks like a small group of middle aged white people"

I don't suppose you recognize these people, vicki.

They are the small number of people who actually PAY for your idiotic social programs.

They are the ones who have relatively small groups because they have intact families, real responsibilities and actually WORK for a living.

Without them, your liberal worker's paradise would be nothing more than the 5% increase in chocolate rations and the news on the next 3-year plan...rather than free health care for the "DID-NOTS".

A simple "Thank You", rather than pusillanimous biting-the-hand-that-feeds-you would be appreciated.

They are the ones who have relatively small groups because they have intact families, real responsibilities and actually WORK for a living.

On a Saturday? Besides, if they/you are so worried about all the very bad things the bill will do to your intact world, could there possibly be anything more important to do with your time on a Saturday? Heck, bring the in tact family along. My guess is it wouldn't be the first time the youngsters hear Mom & Dad screaming epithets at people with whom they disagree.

I guess it depends on one's perspective.

is there something wrong with being intact?

In fact, 8 of the 9 states with the highest divorce rates are red states.

Vicki misses the point. So do some others here. "Tea Baggers" at protests are a small manifestation of what's going on.

Independents are one-third of the electorate -- bigger than registered Republicans, nearly as big as registered Democrats. Normally they're not very politically active, and split more or less down the middle. There are also centrist fringes in both parties with Independent leanings.

Independents weren't a focus for Bush-Rove in 2000 nor 2004. Come 2008, Independents felt betrayed by Republicans in a variety of ways and went for Obama 55% to 45%, which was his margin.

Independents are angry as hell right now and are 2 to 1 against Obama & Co. It's why the Republican won in VA-NJ-MA despite big Democratic advantages in NJ and MA. Do the math: a net 3% to 4% credit for Obama in 2008 is now more than a 10% liability. That's a huge swing, and may be without precedent.

It's enough of a swing to change the outcome of most of the races in November 2010. If this is channeled the right way, the Democrats will get massacred, deservedly.

"middle aged white people" "decidedly white, with an ax to grind" "Teabaggers all. And i do mean it in the most derogatory way."

Nice going Vicki. So middle aged white people -- you left out male -- can never be aggrieved, and have no right to lawful assembly.

I can't wait for November. A lot of normally a-political people are going to make their voices heard.

"In fact, 8 of the 9 states with the highest divorce rates are red states."

Ha! That's simply because most of the MARRIAGES are in red states!

A specter haunting President Obama haunts
The textbooks, episodes of History Channel.
In film the Fuhrer dies by it—it saved a gaunt
And saintly Private Ryan. Secretly, panels
Of Koch executives gloat as Teabag pawns fight
For vassalage. 'Aren't Ernst and Röhm the tax people,'
I've heard them ask. Security from thought—to spite
Their loneliness, they seek control of courts, steeples.
Oh Hannah Arendt dance with me, don't dance too deep—
A squad of goons are coming into town: beep beep!