Status report: I'm sitting at the Anchor Brewing Company bar in the San Francisco airport, whiling away the 90 minutes or so until my flight to Seattle and working on a tab dump. While I while away, you guys should ponder the captioning skills of the White House flacks, who posted the following picture of His O-Ness on the official White House Facebook Wall. The "official" caption follows. You, I am quite sure, can do better. 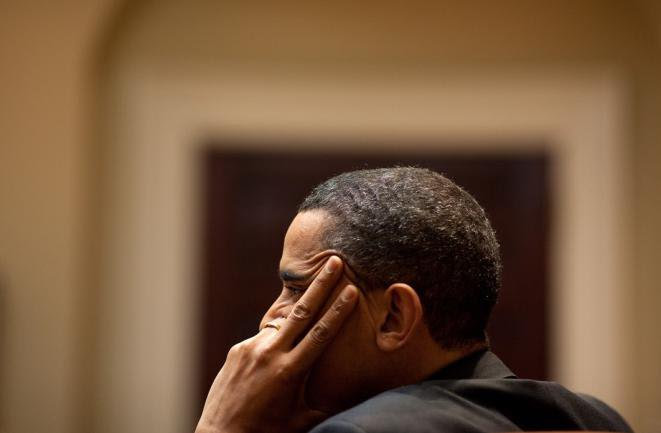 Photo of the Day: President Barack Obama listens during a meeting in the Roosevelt Room of the White House, March 11, 2010.

14 months and trillions later, Obama signals the number of jobs his policies have created while wasting America's time on backdoor reparations and more free stuff for illegals (disguised as healthcare reform). Meanwhile, net losses of jobs number in the millions ...

I hope you tried the Garlic Fries at Gordon Biersch SFO. Potato heaven.

I believe that is the signal for low and inside

One of these fingers is for you, American taxpayer. Can you guess which one?

We have red and blue pills. Here is the alternative for otolaryngologic surgery under O-Care.

"It was just one of those freakish things. I was busy giving the finger to one of our friends, Israel in this case, and in walked my friend Hugo and in my haste to salute, well I don't mean to bore you, but how do I get this thing out of here?"

"OMG, Biden is drooling on his tie again..."

Photo of the Day: President Barack Obama pushes his entire ring finger all the way up into his nose during a meeting in the Roosevelt Room of the White House, March 11, 2010.

How many more bribes do we need to pass health care? Oh, I see. Just two.