Labor force growth as a reason for optimism

For those of you who worry about the economic performance of the United States compared to other countries -- not really my thing, since I'm all for as many people getting rich, wherever they may be, as possible -- then this graph from The Big Picture is reason for long-term optimism. Our population is growing and will continue to grow on account of our superior fertility and receptivity to immigration. Moderate increases in population (as opposed to rapid increases or declines) is the first condition for economic growth, and it is second only to our national character (including our historical respect for enterprise and the taking of risk, which is under attack just now) in its importance for the future of our country and its people. 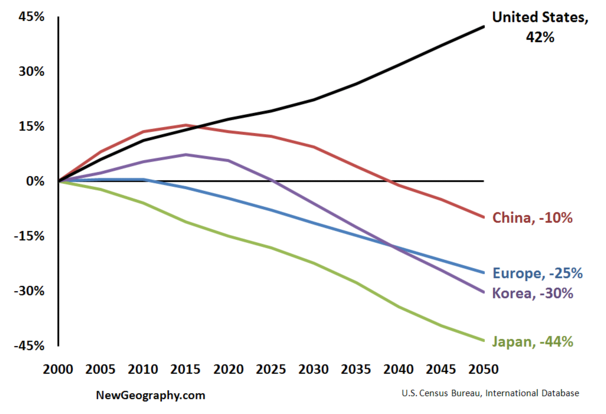 The projected trend is upward, but what will the actual trend be over the next 20-30 years? How will behavior change if we have: continued deficit spending, increased tax burdens, anti-business enviro policy, cap and trade, increased subsidies for prolonged education, federal subsidies for abortion, systemic high unemployment?

It is not at all clear what form of speculation led to the creation of this chart...but I do not look at that speculation as a source of optimism.

One also wonders where they are going to find doctors to maintain the health care and enough rich to tax.


By 2050, I strongly suspect that much of the private wealth in the US will have been confiscated and wasted by the government. Who will pay for all these people?

Well, JPMcT, if they are young enough, they will be paying for us. Not you and me, but our generation and younger people. And by 2050 the Boomers will be mostly dead, so the ratio of workers to retired will actually be improving (if memory serves). And, of course, our welfare state Ponzi scheme is probably more sustainable than those of other countries, especially those with populations in decline.

"Who will pay for all these people?"

This trend line is both burden and opportunity. We can expect continued high unemployment in the near term, especially among the young. How we address this challenge in the next five to ten years will likely set the course for the next fifty years. Government will either be bigger or smaller than what we have now. A true private sector can't sustain the tax burden we've already created.

Assuming the Obamacare nightmare becomes law and survives legal challenge, by 2050 Social Security will have been bankrupt for over 20 years, Medicare will be long gone, the national debt will be well over 70% of GDP and interest rates will likely be well over 20% with our Moody rating a solid B.

TH, I frankly think that by that time, social unrest will have done us in...if not the Midddle East nukes.