Consumer credit across the years

We've seen declines in the rate of growth of consumer credit before, but it actually is "different this time." Short commentary below the graph. 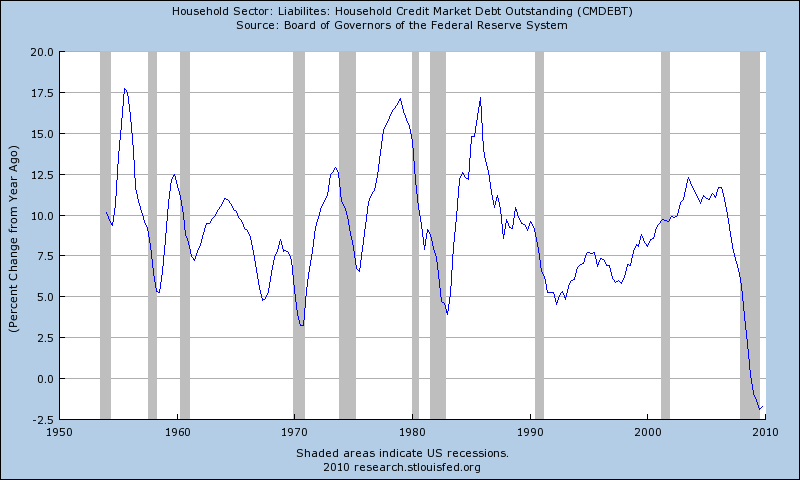 Obviously, such a huge decline in consumer credit in such a short period of time is both a cause of our economic woes and a result of them. No doubt a professional economist could estimate the proportion that is cause vs. effect. Regardless, American GDP is roughly 70% consumer spending (including government health care spending, which sort of mucks up the numbers) and that will not return in force until consumer credit starts growing again.

A related question: To what degree does the decline in outstanding consumer credit reflect changes in preferences that might outlast the recession? Are some people saving more and paying down debt simply because they can? I hope so, but I fear not.

Finally, the decline in consumer credit also reflects the massive socialization of debt. If the federal government goes in to debt to "create or preserve" jobs and the lucky beneficiaries use government money to pay off their own creditors, we have done nothing other than to spread responsibility for its repayment from an individual to present and future American taxpayers. It is far from obvious whether that is the right result for our national character, even if it makes us more prosperous over the short term.

How about people buying stuff with money they actually have, rather than borrowed money? In the long run, that would be better all round.

I am thinking of unsecured debt used to buy consumer goods such as big TVs or cars.