A reader sent along a photo from the gift shop at Baltimore-Washington International airport. His slightly edited descriptive email follows. 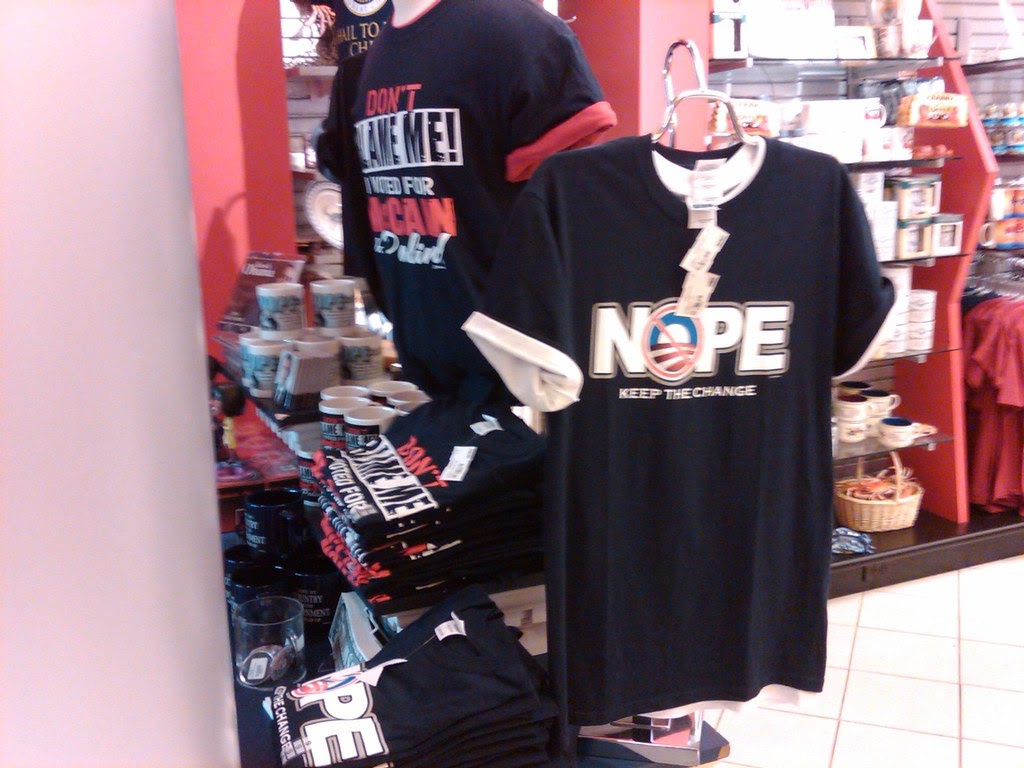 I traveled through BWI in late January, and the gift shop was literally wall to wall Obama Inauguration T-shirts and the like. Which makes sense since lots of enthusiatic people came to DC and BWI is a gateway airport.

I traveled through BWI last week and was struck by the window display in the same gift shop. (see pic attached). Half the stand was Obama gear, and I had a picture of that too, which also has a closeup of my thumb. D'oh!. But we also see Nope Keep the Change and Don't Blame me I voted for McCain - Palin. (And I while the Don't blame me I voted for .... is a hardy perennial, I have never seen the undercard so promoted like this.)

Storekeepers follow the money, and at the very least don't want to scare away bidness. So I found this interesting. Not dispositive, but interesting.

Me, too. Are the forces of Hopeless on the rise?

We can only hope.

The "forces of Hopeless." You've managed to both parody and reveal your true self at the same time. lol There's no "tide" to turn. Never has been. It's all in your heads.

Thank you for blowing the whistle on these racists. Disrespecting the One in Maryland, for God's sake, is treason! ACORN or union thugs (brown shirts) will correct this injustice quickly!

Chambers is twisting in the wind...Can't say that I'm shocked or dismayed!

I guess Chrissy is finally admitting BO was a sham from the git.

If I ran a shop I'd cater to the Obama haters as well as the Obama lovers. Why limit your customers. So is that statement of politics or profit?

But hey, maybe the tide's turning.

Rasmussen's daily poll says the tide may indeed be turning. The president is still popular with his true believers, but the independents seem to be sliding away.