Snarky partisan graphic of the day

The Democratic health care plan, according to the GOP... 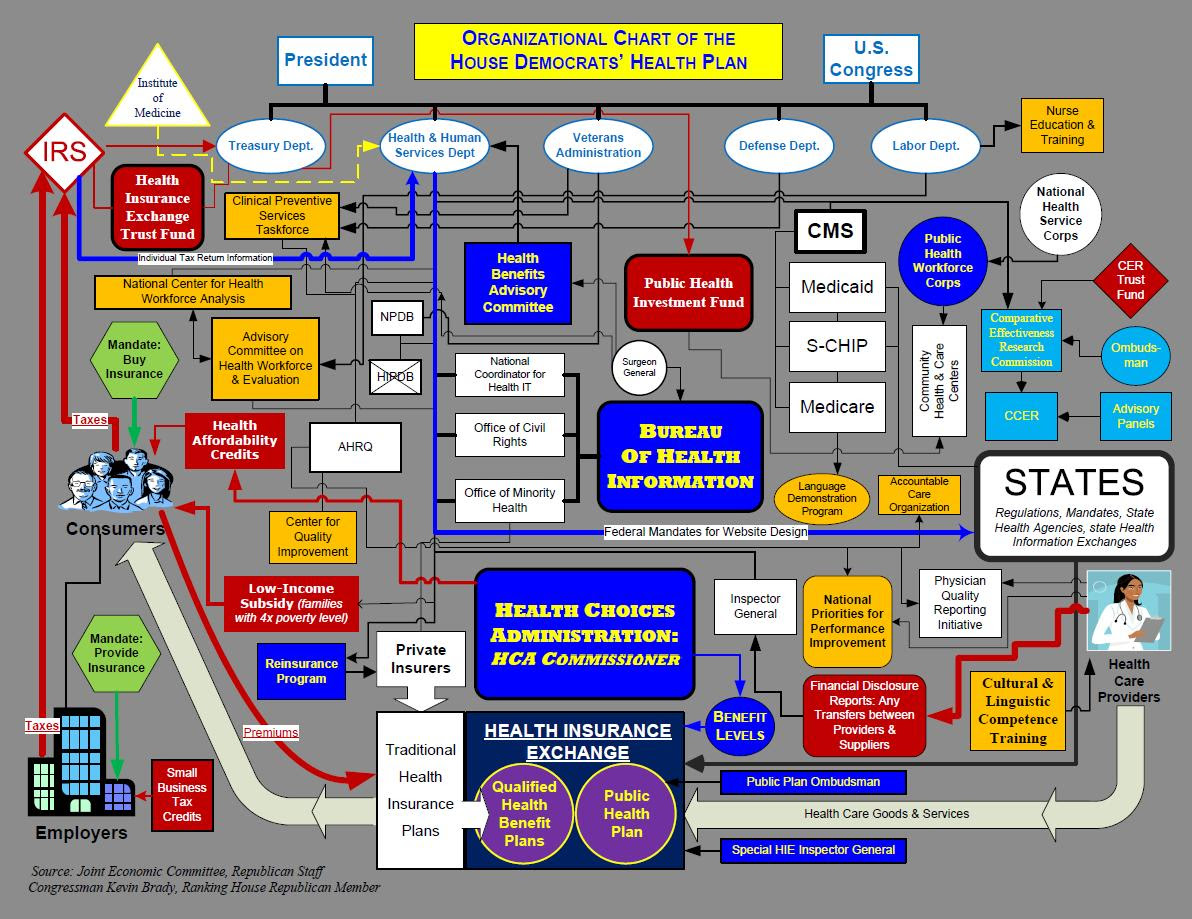 I'm surprised it is this simple.

Well, they probably skipped over pages and pages of sub-processes to make it fit one page.

This is the super high-level executive summary

This is exactly the same problem as with the "Rube Goldberg" of financial regulation.

As I recall Hillary's plan had a simpler but still awesome federal structure.

In addition, each state was to have a parallel structure to operate the plan in the state.

This scheme removes that need by making sure the plan won't work at all in any state.

Look at the big white "States" box, middle level on the right, and there is bureaucrat heaven.

States already have plans such as Medi-Cal in CA. They can change the name on boxes but those state employees aren't going away. Nor will the state costs of paying them.

No sense worrying. The entire matter depends on people who won't read it but will calculate their chances of reelection.

The boxes that I have expertise in, Medicare and Medicaid, each have exponentially more complicated diagrams contained withing them.

Imagine a Schoolhouse Rock version comparable to "I'm Just a Bill." It would go on for hours.

"I'm Just a Pill" would seem fitting, tracing the pill from development through prescription through lawsuit.

Just tax the hell out of Goldman Sachs to pay for it.

All of this is so bad, it's good. I expected 12% unemployment by year-end ... now I guarantee it. No one will hire with this legislative overhang. We could hit 16% unemployment ... I'm not kidding ... there's a private sector strike building.

When it hits, the Dems are toast. Obama will be out of favor before his Sugar Rush hits. In Congress, the young Dems are being led by over a cliff by old line party heads like Pelosi, Reid, Kennedy and Rangel who want a legacy before they die. Hence the legislative push.

Can anyone else explain why the market has been moving up. I can only say that it's because it expects that Obama has already blown himself up. You'd never know this from MSM.

So how do we handle a three-year lame duck. If this plays the way I expect, MSM will turn on him in 2010. MSM should be burned over this, never to return. Maureen Dowd should be turned out to turning fetish tricks.

John Boehner has really impressed me the little I've seen him. His unfortunate surname could be an asset. His impromptu fillibuster on Energy was stellar -- too many of us were at work or sobbing over Michael Jackson. My sense is that the guy is one of all us, has gravitas, and balls. Developing ...

I half believe the Goldman conspiracy theories. But Goldman only made $3.5B in the quarter, it's market cap is only about $75B. As a point of reference, $75B is roughly the net worth of the two most successful people in the history of private enterprise -- Warren Buffet and Bill Gates.

Our government is poised to piss away much more than $75B a month for the foreseable future.

Guys like CC don't think this will affect them, but it will. Obama will end badly, I just can't see what's on the other side.

Once again, Mr Chambers run away and hide

This chart is flawed because it doesn't even suggest where a player,e.g., doctors', lawyers', pharmo, etc., organization should place it's bribes, payoffs, kickbacks, campaign contributions to achieve maximum effect. Sure, they go to senior democrats, but do they go to members of the Congress, thus in the administration and regulatory branches or to the staffs of the czars?
Sure, citizens are going to get screwed but that doesn't mean that some of us democrats who are not in Congress can't make millions!

Just wait until you see the chart for the current system...

Which is also a creation of three generations of Congressional interference, in coverages and procedures. Also, remember that 52% of current payments are government payments.

I wonder what a free market in health care payments would really look like?

@Link: We have also seen reports from Intel, Goldman, and JPM (also revised forecast from IBM?) all come in better than expected, with a large job in continuing jobless claims. I daresay all of these things matter more than the factors you cite. Correlation != causation, post hoc ergo propter hoc, etc; it is easier to take people seriously when they at least try to dismiss the obvious arguments.

with a large drop*

don't believe the drop- the stat is corrected for seasonal factors. In this period, normally, auto plants all close for maintenance and repair. So the stat is "corrected" for that normal fact, even though this year all the auto plants have been closed already for weeks due to demand declines and bankruptcy turmoil. The statistic is incorrect.