Orange is my favorite color, but...

I think we all know that orange is my favorite color, even more so now that the ThT is a Hokie. Orange, however, is as treacherous as it is bold, and as likely to stab you in the back, sartorially speaking, as flatter you. To wit... 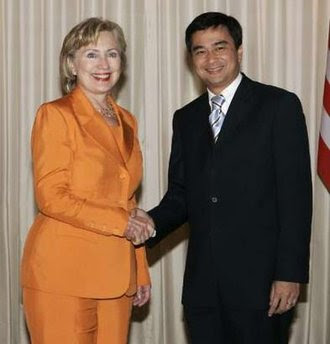 Suffice it to say, orange is not a "slimming" color.

I saw a picture of her in that outfit on Drudge and thought the same thing, TH. She has morphed into a fat little toad for sure.

Personal attacks, that's the best you can do? Next you will be questioning her birth certificate. Please.

Although she would be far from my first choice, I'd trade Obama for Hillary as President in a heartbeat. A lot of forces had to line up against Hillary for Obama to squeak into the nomination. Who cares if she has fat ankles. p.s., Bill was a better Republican than Bush.

vicki, lighten up a bit. This was hardly a "personal attack" and definitely not the best I can do. I was just amused by her outfit, which I believe to have been a very poor choice.

I'm with Link on this: far better Hillary than Obama. At least Hillary has some intellectual depth, some original thinking, and a pretty good grasp of reality. (Part of which is that a lot of women actually have hips. Hillary isn't skinny but she's hardly fat.)

(For clarity, my "fat" comment is directed at the first anonymous blogger, not at TH who is too clever to be caught so easily.)

I'll make it three. I so wish Hillary were President now and not Obama. Hillary would still try to get healthcare reform passed, but she'd have most likely learned from her earlier debacle in the 1990s, and she'd be going about it differently--and not for a few years. What's more, after years of relationship-building in the Senate, she wouldn't have just crowed "I won" and tried to shut off debate, that way.

I might not agree with her on very many issues, but at least she'd have more wisdom about governance than Obama has shown--the sort gained from years of closely observing (and participating in) Bill's (and her own) missteps and successes.

"Personal attacks, that's the best you can do? Next you will be questioning her birth certificate. Please."

Best? Hardly. That doesn't even approach some of the cruder garbage directed at President Bush, which could be easily imitated. Chimperor. Bushitler. Fascist. Coke addled fratboy. Stop me when things sound familiar.

Also, to question a birth certificate one would first have to be produced, wouldn't it?

Aside, 'hips' do not = 'thighs.' Hips are bones. Bones do not grow that way. Thighs do. What makes thighs grow that way? Heavy duty training or fat. And she is not an Olympian.

She's no whale or anything, but 'she's not fat, she's big-boned' is just as much a falsehood as it ever was.

As somebody married to a pear-shaped woman, I have to say Hillary looks pretty good for her age. I have to.

Now that shade of orange has me puzzled. Even the Secretary of Agriculture seems to be getting into the act.

The outfit is indeed unfortunate. It would have been fatal if worn in the old Irish neighboorhood my forbears settled in not that long ago.

But it wouldn't make me want her as president. She would have the same aganda as Obama...but more political common sense and less narcissism. We also would have had the same crowd of far-left idealogues in Congress.

The result would probably have been slightly less catastrophic than Obama, who is now getting ready to self-immolate.

Speaking of "The Rotund" did you catch the media reaction to the nomination of Regina Benjamin as Surgeon General? The woman has a list of achievments a mile long, numerous community awards and impressive medical administrative experience...and all they can do is to complain that she is fat and therefore a bad example.

I'm trying to decide whether the media is a reflection of public stupidity...or the cause of it. Perahps a combination.

My first impression of the outfit (after donning my sunglasses to cut down the glare) was that it was very similar in color to that worn by the inmates at county jail. Who knows? Maybe it says 'property of Cook County jail' on the back? HRC should have the outfit burned or donated to highway construction personnel. She is a walking eyesore.

Well, JPMcT, you've got a point. But one of the reasons I'd prefer Hillary as President over Obama is that the public already knows a lot about her and has shaped their views about her. So no matter what she tried to do in office, she wouldn't be pulling the wool over so many people's eyes through smooth teleprompter reading. Furthermore, the press wouldn't give her as much of a pass when it came to inconsistencies, distortions, lies, and so on as they've given to Obama. Sure, the press would still be supporting her left-wing agenda, but they wouldn't be avoiding problem areas in her governance as they have with Obama. Finally, I don't think she'd be trying to kill the economy. She'd still be looking to expand the government, but probably not all at once by quadrupling the deficit.

TH -- I "get" that you're trying to be funny. But does it ever occur to you, as the father of a teenaged daughter, the message that you send her (not to mention your teenaged son . . . and any of their peers who might tune in) about women when you post this sort of thing (to say nothing of the skin shots)?

Some of your posts are specifically directed at them, so you can't say they aren't your "intended audience." With great power, after all, comes great responsibility.

LOL! The message is don't become a sanctimonious shrew, don't get fat, and don't take fashion advice from Guantanamo inmates...