I have not covered the "tea party" protests that have been growing over the last couple of weeks because I have had nothing to add to the legion of righty and libertarian bloggers who are all over the story like white on rice (see, e.g., the massive coverage over at Instapundit, where you can certainly get a good flavor of it, with pictures, if you have been off-planet for the last few days). And, in any case, I'm in France, where the big "social unrest" press coverage revolves around "bossnapping" (in which workers forcibly detain the corporate tools as a form of labor action) and "rotating hunger strikes" (in which workers take turns fasting for 24 hours in the hopes that this risible echo of Ghandi will shame employers out of laying them off). That's nothing if not funny, which leads me to my one tea party post.

Over night, Andrew Berman referred me to his huge collection of photographs from the "tea party" protest in New York yesterday. In scrolling through Andrew's pictures (and others elsewhere in the blogosphere) of protesters and their signs, I could not help but think that the taxpaying class needs to upregulate its wit. Most of the signs and banners, with a few exceptions, were really boring, neither funny nor offensive. The left is really much more creative, perhaps because it does not feel bound by law or convention. That is, after all, a big part of the lefty schtick.

That said, it will come as no surprise that I rather liked this one: 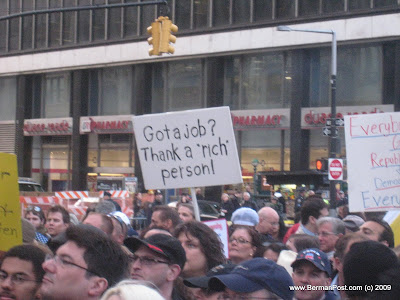 They invited Corzine to the one in Trenton, but he didn't show.

All the GOP candidates on the other hand were there, which is highly ironic since both sides have direct responsibility for the present fiscal mess that is New Jersey.

The Republicans suddenly discovering fiscal responsibility is like an alcholic aunt swearing off vodka. You know there will be a relapse as soon as noone is looking.

My favorite sign so far referred to the "che-ange" we all hoped and voted for.

As for chants, beats me, how bout

Quit playing games with TARP
Obama, you're tearing us apart,
I knew it from the start
Rev Wright's gotta have a part

You know, meta, that's the kind of thing I'd expect from the people who trashed Sarah Palin. I'm really sorry to see it from this side of the aisle.

meta-4, I love you and you often contribute great comments, but that one was not cricket. Fun and mockery is one thing, but that comment was no cool. I have deleted it.