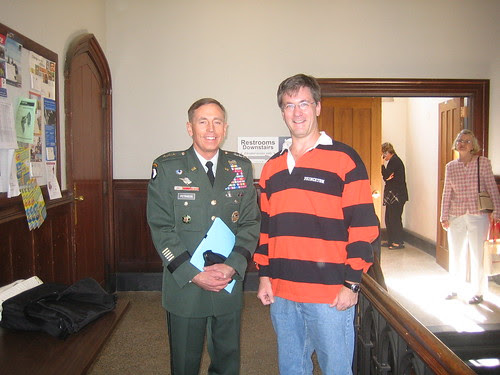 General David Petraeus (generously posing at right with Your Blogger outside McCosh 50 a few years ago) is going to visit Iowa, and not to go on RAGBRAI, buy furniture in the Amana Colonies, or enjoy the benefits of honest state government. No, he is going to give the commencement address at the University of Iowa in May 2010. It is hard to imagine a more useful forum to test the waters for a presidential run in 2012. Much more useful, for example, than his return to his alma mater of Princeton to give this year's Baccalaureate address.

There are three possible explanations for the Iowa trip. The first is completely one-dimensional: Iowa invited him, and Petraeus accepted. The second is that he is, in fact, thinking about running for president in 2012. That would answer a question which I believe remains unanswered: Is General Petraeus a Republican, or a Democrat? In any case, let me be the first minor right-libertarian blogger to endorse him. He's got my money and my time if he decides to make a go of it. If there are any Petraeus organizers out there who want to get in touch, send me an email at the address on the right sidebar.

The third possibility is that Petraeus is not really interested in running for president, but sees the Iowa speech as a way to throw a deniable brush-back pitch at President Obama, with whom the general has not always been in perfect agreement. The President might prefer to keep him in Afghanistan than to retire him to the talk-show and lecture circuit. I've seen him lecture, and he is entertaining enough to make a lot of money and build a huge organization (something we already know Petraeus is personally good at) in a short period of time.

There is real promise here. There are more than a few similarities between unconventional war and political campaigning, to wit: As Gateway Pundit points out, we will know how real this is by the speed with which the administration's pals in the media start pumping out anti-Petraeus stories.

MORE: I note that the Daily Iowan, the University of Iowa's student paper, has not published the Petraeus story. It would be nice to see some confirmation there.

STILL MORE: Not being big on social conservativism, my fantasy GOP ticket in 2012 would be David Petraeus and Bill Frist. That Dr. Frist once literally saved the life of General Petraeus is a detail that would add some great mystique to a ticket that would have great potential to influence the Republican party for a generation.

CORRECTION from CENTCOM (4:30 pm EDT, via Blackberry): I just received the following (disappointing) email from CENTCOM. General Petraeus is giving the "General Sherman," the traditional words necessary to repudiate all political ambition in American politics:

For clarification and correction, if you would please, post the following statement to your blog. Thank you. Erik

Statement by the US Central Command Public Affairs Office:

Contrary to several recent blogs, General David Petraeus, the Commander of the US Central Command, has not been asked to speak at a university commencement in Iowa in 2010 and has no plans to do so.

It us unclear where this rumor started, but it is not accurate.

Furthermore, General Petraeus is not planning to run for President in2012. He has repeatedly stated that he feels very privileged to have been able to serve our country in uniform and that he would like to continue to do so as long as those above him want him to serve.

When he retires, he has no intention of seeking political office.

No wonder the Daily Iowan had not covered it. I am sad.

My dream team would be Petraus and former Ohio congressman John Kasich.
Jindal and Palin and Newt and all the others are tainted by media pre-branding them of being dumb or extreme or whatever. Start fresh.

Petraeus is an American hero. There is no doubt about that. He has solved seemingly intractable problems, and heaven knows we have plenty of those. But we know nothing about his domestic positions; how he would govern. We just elected a President with no track record who promised to govern in a bipartisan manner from the center and who isn't. Petreaus is not as much of a cipher; he has a huge, real resume of success. But where does he stand on the central questions facing America today?

Petraeus could really be the man Obama pretended to be; I don't know yet.

It'd be great if he ran; count me as supportive but inquistitve.

Let Petraeus declare and see how quickly the MSM brands him defeat's father.

Geez, TH, you had me interested until you added Bill Frist. What's the matter, isn't the guy from Rhode Island (Jeffords?) available?

If my feeble memory is correct, didn't Frist once unload a big chunk of HMO stock just days before it tanked?? I don't know if he was ever accused of wrong doing, but I think the dems would pound him with this info if he were to run for office again. Anyone else remember that?

A feeblemind, you remember well, but partially. Not only did Frist do nothing wrong, but he acted in the best interests of HCA stockholders. My lengthy analysis from 2005.

The Dem's wouldn't waste their time on Frist who
could be portrayed on SNL by anybody with a bag over their head (and the SNL portrayl would be more dynamic than the real thing.

Obama is a created ninety day wonder so now any and all individuals who have some name recognition is a viable candidate for the office of the President regardless of any qualifications for that office.

Those of us that know Billy Frist would love to see him run. Politically, it may have been a mistake becomming Majority Leader which made him a target.

SR...he is a lot more dynamic in person. He was brilliant of Larry King recently.

feeblemind..they might use it against him as they will be looking for anything but he did nothing wrong. If he cared about money he would have become an exec in HCA - not a doctor. He's far brighter than his older brother who did that.

I knew him when he was a kid, and a teenager and there are no skeletons from back then. In fact, that is rare. He was then, and is now, a rare, extra special human being.

I have the highest respect and admiration for General Petraeus. Electing a president is always a gamble and I would gamble on him.

Having said that, his good works are distant to the average person. The TH blogamily may be quite aware of him, but even we do not know what his thoughts are regarding the issues away from the battlefield.

I think it would be pretty hard for him to run in 2012 if he wanted to. He has a war to fight and we won't have an opportunity to begin to know him until he is done with that.

We really should be thinking about 2010 anyway.

The problem is that the public persona is what counts.
I learned yesterday that Al Gore was "funny" according to Tommy Lee Jones. He learned to play Dixie on a touch tone phone when they first came out.

Palin is said to be great in person as well. Look what the Dems did to her.
Lastly, the Dems are about to cast Docs as the next wall street greed merchants. Frist is said to have flown home on weekends from his cardiac transplant fellowship at Stanford in a private jet. Ouch.

Thanks for the reply and the link, TH. That was as good of an explanation as I have seen for what happened. Unfortunately, I think my point still stands. The dems can accurately charge him with selling stock in a family controlled company before it went down. As the dems are masters of half-truth and innuendo, the stock sale is still a political problem IMO. Especially so in the context of the stock market collapse and the concept of the eeevil inside trader who cashes out rich while Joe Sixpack loses his shirt. Given that, I think it might be difficult for Frist to defend himself in the 30 second sound bite. I guess we will see if it is an issue should he decide to run for office again.

SR...Billy Frist is a pilot. He has his own jet. It is sometimes outfitted as a hospital so he can operate in Africa. Nashville, where he grew up, has poor airline service and is not a hub. Many executives there fly privately.

There is no comparison with Palin. Frist, like General P.,
is a truly uncommon person. He was not just a great guy and a leader...or someone you would call outstanding or brilliant. He was the kind of person his friends would lay down in front of a truck for. He is kind, wise, generous and quiet about it.

I think a bigger problem politically, is the Terry Schiavo mess. But I'll tell you something. Frist is the real deal.

As tempting as it might sound Petraeus topping the GOP ticket in 2012 is very unlikely. He is a foreign expert, but that doesn't help when he's running for president he's running for more than commander-in-chief. But if he enters the primaries and drops out at the right time, and endorse the right candidate, he can end up a VP. He will add weight to any light foreign policy ticket. Whether the top is Palin, Jindal or Limbaugh many GOP stars could use some foreign policy weight. But then again, the rising stars of the GOP is probably to extreme for Petraeus.

The dream ticket is the General ticket. Powell/Petraeus. If WWIII starts in 2011 they will win in a landslide

* This was meant as joke, though obviously it fell a little flat. Petraeus has no plans to go to Iowa that I'm aware, this year or next. I regret the confusion that has resulted from my clumsy attempt at humor.

I hope TH can attend the Petraeus speech at Princeton anyway, and blog the highlights for us.

The Ike parallels are obvious, but I think the media environment now as compared to 1952 would make it quite difficult for the General. Even Powell (and, although I assume Anon 3:14 was joking, Powell would not run on a ticket against Obama, a man he endorsed), when speculation surrounded him about running in the Republican primary in 1996 and ultimately against Clinton (which certainly would have been a more interesting/entertaining race than Dole/Kemp against Clinton/Gore), had served early in his career as a White House Fellow and had been Chairman of the Joint Chiefs of Staff, even if he had not run for elective politics, so he did have some D.C. experience, for better or worse.

Frist is an excellent doctor, great guy, great Cheeser, and not particularly good at politics. I mean all of that as a compliment.

You should be flattered the CENTCOM PAO is watching you so closely.

My ideal ticket would be General Petraeus and Fedex's Fred Smith. Both coming from outside the beltway so to speak, both with military experience and executive experience, one running a large military effort, the other running a world-class corporation. And to be honest I wouldn't care who was on top of the ticket.

We have to start flushing Washington, DC of the fecal matter that keeps stopping up our system to new and fresh and creative ideas can start to flow again, the way our Founding Fathers intended it.

But what does this mean?