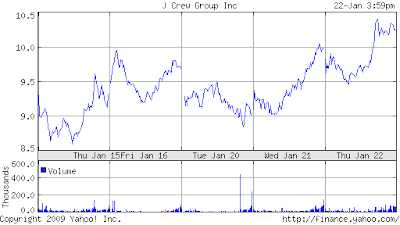 J. Crew struck gold on Tuesday. The traffic following the news that Michelle and the girls were wearing J. Crew custom togs at least temporarily crashed its web site. Perhaps as a result, its shares have risen 15% in the last two days.

Curiously, of the many mainstream media stories that covered this important fashion story, none have mentioned the financial connection between J. Crew's executives and directors and the Obama campaign. Chairman Millard Drexler gave the maximum (Open Secrets links require entry of a security code) to Obama (in addition to other prominent Democrats, such as Al Franken, Christopher Dodd, and Hillary Clinton) for both the primary and general election cycles. Director and insider James Coulter (presumably no relation to Ann) gave the max seemingly multiple times. Director Josh Weston gave thousands to the Obama campaign on multiple occasions. And so it goes. I searched every J. Crew insider -- wealthy corporate tools all -- and not one contributed to John McCain. Of course, the fashion industry has always been fashionably left, but it stretches credulity to believe that the Obamas do not know that J. Crew's insiders are big donors.

Come on. The Prez asked all of us (even wingnuts) to roll up our sleeves and help. But it's easier to churn up the net...or talk radio...or Fox...with crap. Like Hamas. Easy to destroy than build. JCrew's stock rose because JCrew-shopping folks are Obama folks. They like the way their kids look in the clothing (I like Mini-Boden, a limey company, myself). If the Bard of Wassila had become VP, Wal-mart sales would have been even better for the holidays, particularly for ammo and polyester imports from China, in honor of her teenage drop-out daughter and beau. So it all makes sense, eh?

People do business with their friends.

Again, I do not think there is anything in the least bit wrong in the Obama women promoting J. Crew. I just wonder why we have searchable databases that list campaign donors if reporters are not at least going to refer to them when they write stories such as this. This was an attack on the press, not the Obamas.

"Easy to destroy than build"

Bwahaha, Chrissy, just like you were building Bush the last eight years. "God bless America" Chrissy is packed so full of horseshit it's shooting out his ears in jet streams. Because if BO fucks up and gets booted in 2012, you'll be the first one out there, Chrissy, screaming about white racists and blaming it on the Jooos and "God damning America" and stomping on the flag with Rev. Jerry and Billy the Bomber, Chrissy.

Another thing, Chrissy - Sarah Palin isn't within a million miles of this story but you had to bring her up, Chrissy, as you do in almost every post now, Chrissy. You're scared of a woman, Chrissy.

Since Mr. Chambers already parked the thread in the toilet, I'd like to throw out the idea that Levi's should make button-fly jeans in cuts other than the traditional 501, for those who like the tradition but ain't got "chicken legs".

fyi Coulter is a founder and managing partner of Texas Pacific Group, one of the largest private equity investment firms. When J Crew was floundering as an investment, he brought in Mickey Drexler, who had been the Gap's longstanding CEO and Merchant til he wa fired, to turn around J Crew, which he has done brilliantly.

So what about LL Bean and Brooks Brothers? Curious minds want to know which prep favorites are safe...

DEC - People do business with their friends.

And that explains Mr. Madof.

@Gary Rosen + Christopher Chambers - Can't we all just get along? (CWCID: Rodney King)

@Cardinalpark - good point about TPG, a long-time well-respected private equity group, whose partners are not really a bastion of liberalism.

As many of you are aware, executives make political donations for all kinds of reasons other than ideology -- access being the obvious one. Many senior executives make max political contributions to multiple candidates as a hedge. That doesn't appear to be the case here, but so what? "We'll donate if you wear our stuff" seems as though it is a bit of a stretch, and I doubt Michelle would have her family dress in items she didn't genuinely like just as a quid pro quo for a campaign donation.

I actually don't think there is much of a story here. Frankly, the Obama family could wear J.Crew every day for the next month, and the company will still get bruised along with every other niche retailer in this economy. I happen to like their stuff and buy a fair amount of it each year (almost always on sale after receiving a promotional email for an extra 20% or 30% off of the existing sale prices), and have an excellent collection of patch madras shorts, certainly an, um, acquired taste. Anyway, if the Ned Lamont 2006 campaign in CT did not prove that East Coast preppies have turned largely from conservatism to liberalism, throwing open the gates of country clubs from Baltimore to Boston (well, maybe not), then this J.Crew dust-up validates it.