We drove from Rice Lake, Wisconsin to Iowa City today, virtually all of it on "blue highways." After a brief detour west to Prairie Farm (the oldest community in Barron County, Wisconsin), we drove south on 25 to I-94. We popped east to Eau Claire, and then south on State Hwy 93 to LaCrosse where we stopped for lunch. With the exception of the short stretch on the interstate, the entire drive through northwest Wisconsin was beautiful.

From LaCrosse we took Wisconsin 35 down the east bank of the Mississippi to Prairie du Chien, where we crossed into Iowa on route 18. Then Iowa State Highway 13 all the way to Cedar Rapids, which is (of course) a mere hop to Iowa City.

The weather only added to the verdant scenery of northwestern Wisconsin and northeastern Iowa -- we were dogged by thunderstorms alternating with sunshine the entire way, and saw some spectacular lightening bolts in the big sky of eastern Iowa.

Tomorrow the TigerHawk Teenager, now 17, has interviews at both the University of Iowa and Cornell College in Mount Vernon. I snapped a picture of him off my Blackberry in front of the Old Capitol at about 8:30 this evening. Apologies in advance for the fuzz: 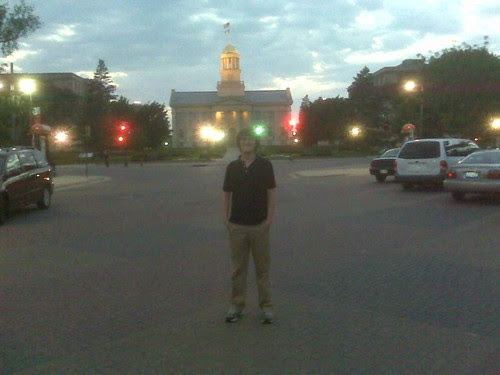 Regular readers know that my father was once chairman of the History Department at Iowa, and had an office in Schaeffer Hall, one of the five buildings constituting the Pentacrest. Goofy as it sounds, it was huge fun for me to stand between Schaeffer and Macbride in front of the Old Capitol with my son. I have to admit, it would delight me if he went to college here. The distance notwithstanding, I'd be certain to visit at least five weekends a year...

TH: It looks as though Iowa City is out from under the flooding of the spring. Any residual effects that you have seen?

Welcome to Iowa City! If your son comes here and wants to get involved in fighting the leftist nut-balls here, he would be welcome. Opposition to the leftist anti-Israel nutballs here is sorely needed.

Just make sure he doesn't go to Ames. So will you be hitting the world's biggest track stop in Walcott on the way back?

Having semi-recently finished a two year stint as a TA at Iowa, I'd have to say that Iowa City looks like heaven on earth for 18 year olds.