A gathering of eagles!

There is bald eagle nest right above our family's Adirondack camp, built in an old tree that actually grows through a hole in the floor of our deck. Not 20 minutes ago I heard one of the young ones screaming away and snapped this photograph. 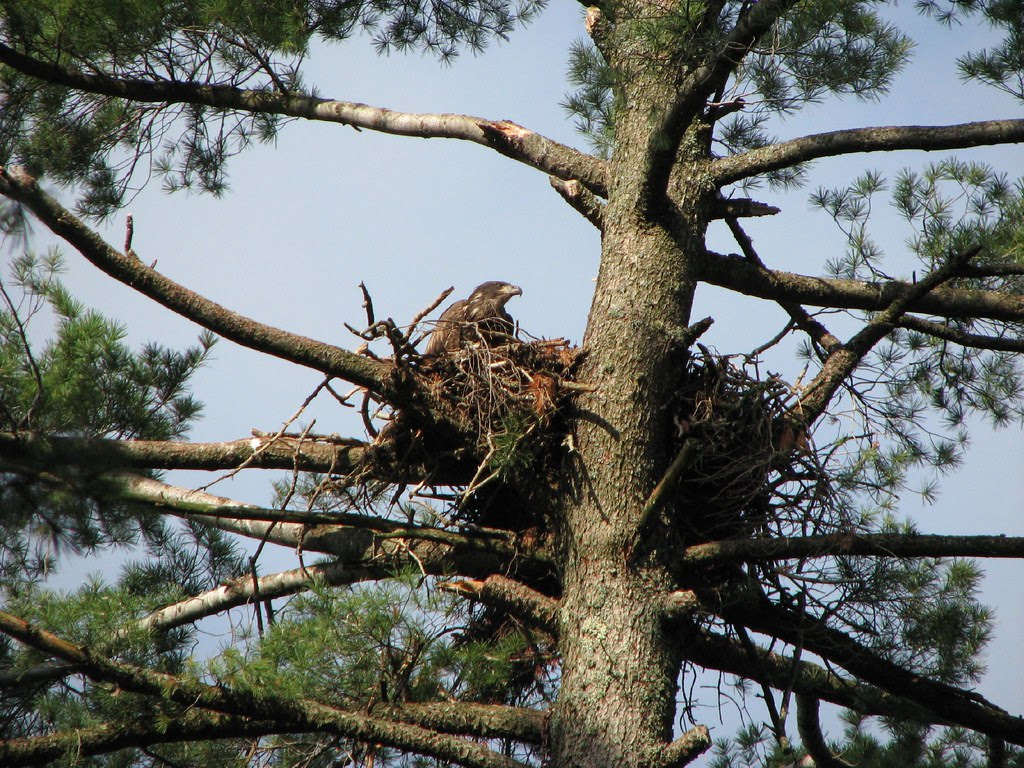 Here is the context -- the nest is toward the top of the second tree from the left. 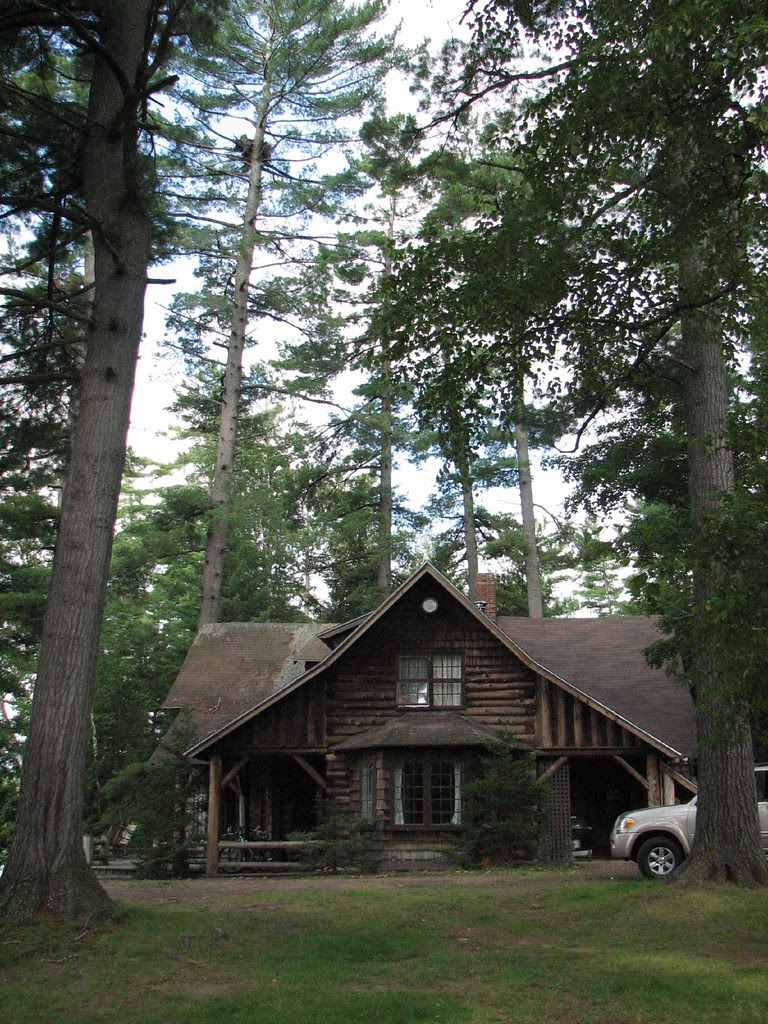 Rumor has it that the parents who built this nest are one of only two nesting pairs in all the Adirondacks, a factoid that I found surprising insofar as there are 90 pairs in New York State, and you would think that eagles would rather enjoy the low population and happy hunting in the 'Dacks. So we are very lucky.

There is a price to pay, however, for such natural grandeur. The 'Villain reports that we are apparently to expect "periodic showers of whitewash, partially eaten small mouth bass, and the bones of small mammals" on the deck, so we should repair to the dock for the cocktail hour. And then, of course, they scream when the new day dawns. Not a mere cockle-doodle-doo, mind you, but incessant farookin' screaming. Yes, we know it is morning. Thank you for informing us. Four years ago, the last time eagles nested nearby (although not so nearby), Mrs. TH, ever the naturalist, mumbled into her pillow around 6 a.m., "I never thought I would think this, but it does indeed seem possible to have too many eagles."

But they are cool.

Naturally, if a get pictures of the parents you will be the first to know.

PLEDGE SATISFIED: No sooner did I clean up after a breakfast of pancakes and bacon for the team than Mrs. TH spotted one of the parents. 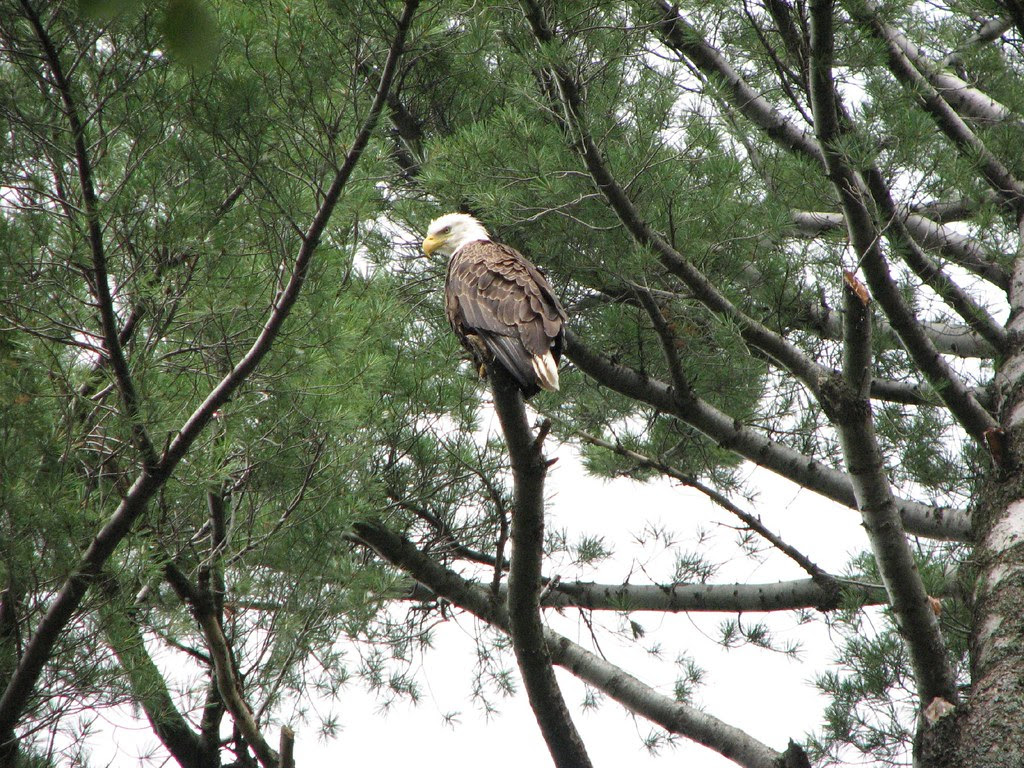 It really is an unbelievable blessing. How many people get to sleep under the watchful eye of eagles?

And yeah, if you're gonna go enjoy the great outdoors, you've got to be ready to enjoy all of them, including the local critters.

Still better than howling neighbor's dogs, in my opinion.

"Good catch," which is the appropriate corporate lawyer concession of a typo found. You're going to do great in law school!

You've got a great "up stairs" neighbor there! (Must make a mess on the deck, however.)

I too doubt that only two nesting pairs of bald eagles reside in the Adirondacks. I seem to remember seeing several up near Low's Lake when I was working at the Patriots' Path BSA camp at Sabattis. And if they are in that neck of the woods, there are an awful lot of bodies of water they could find habitable.

I wonder if that number isn't quite old. The population of eagles has ballooned in the last decade or two. Why here in Tioga County, PA we have 5 or 6 nesting pairs.

Hadn't heard that there were only two nesting pairs -- although the guy from NYSDEC did say that the Adks had an "off year" on eagle hatching . . . apparently weather-related post-egg-laying.

Check out that book we left in the Main Camp about eagles -- there is a lot of interesting info in there (Wyatt had the idea to buy the book & leave it in the camp).

Just watch where you walk. When we were there Thing One got nailed, and were not talking a quarter sized white lot, either.

He was philosophical, saying "Its not every kid that gets pooped on by the National bird."

He's a glass half full guy.

Thing One is A ONE!