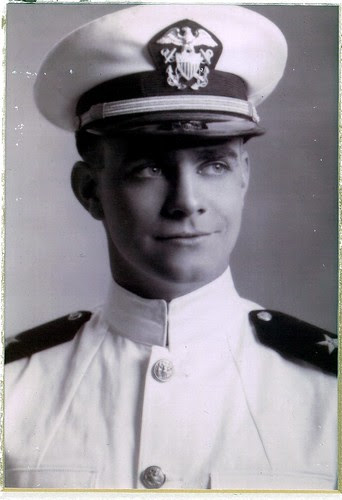 Ten years ago today, our father, the historian, professor, librarian, medieval scholar, gardener, officer of the United States Navy, husband, brother, and grandfather, died from complications of colon cancer. I have been thinking about him all day, about how much I still miss him, and how much I wish that my children would have known him in life.

The feelings are especially acute this anniversary, for we spent the weekend at a family reunion that included his brother and other people who remember him. (For reasons that shall remain "inside baseball," my father would have been intensely amused to see his cousin's son, GreenmanTim, gamely sporting a "TigerHawk" t-shirt.) He was widely missed and commented upon -- not only was he the oldest member of his generation of the family (and, interestingly, the only one who would admit to generally voting Republican), he was deeply committed to the cause of family and its history. In addition to having been a professional historian, he was the family historian of his generation, a duty that has appropriately now fallen to the very same GreenmanTim, as regular readers of his eclectic and very creative blog know (which, by the way, my father would have found more interesting than TigerHawk).

In any case, we have made it something of a tradition to write about our father on this day and on his birthday, All Saint's Day. These posts (the "free speech" eulogy, the 'Villain's eulogy, the "annual cigar," and an excerpt from a tribute written by the great Dartmouth medievalist Charlie Wood) have attracted many generous comments from regular readers, but two have been so touching that they stand as their own as new memories of our father.

First, from a comment that only recently landed in the first post that I wrote about him:

I found this site as I googled your father's name after a discussion I had about influential college instructors on another forum. Just on a whim.

I'm sorry to read about his death, even 10 years after the fact. My own father died of cancer just last year.

The fact that I remember your fathers name when I graduated from Iowa 26 years ago should bear some testament on how he impressed me. I'm hard pressed to come up with any other of my non-ROTC instrutors names off the top of my head.

I still can hear his voice discussing the evolution of European society from the fall of Rome to the Rennisance.

I remember one warm day, getting to class late, and getting stuck behind a pillar in the "Purple People Eater", the auditorium in the Chemistry/Botany building.

Despite not being able to see him, the warm room, the late night before, I cleary remember following every word, of leaning left and right to see the board on the other side of the pillar and writing copius notes. Any other lecturer and I'd been asleep in 5 minutes.

I looked forward to his lectures, and it always seemed that the period was over before it began.

He made the flow of history so logical, made things seemingly unconnected make sesns, of course that's how "a" got to "b"!

Over the years I'd watch a particularly interesting history program on TV, and my reaction in seeing his name on the list of contributors was "well, no wonder it was so good".

I was a business major, with a real major in getting my commission through AFROTC, but Professor Henneman is still the most memorable professor I've ever had.

Thank you, Randy, for taking the time to write that. It is new history of my father for his family, who might not have known was a wonderful teacher he was (I remember that he dragged me, with some resistance, to one of his Western Civ lectures when I was a loutish teenager; I was quite surprised to learn that "Dad" was actually very interesting).

As nice as Randy's comment was, it was topped by a wonderful email received about a month ago from one of our regular commenters:

My father died last night. Thanks to your blog and the way you shared the memories of your father, I spent a lot more time with him these last few years than I might have. People make a difference, and good people make a good difference. Thanks again.

No, thank you. Your email was news to us that our father, who had such enormous influence on us all, has reached across time and touched somebody he never knew in a way that would have pleased him very much.

I'm sorry for your loss. Your father sounds like an outstanding person.

Tigerhawk,
Thanks for that. My father finished his years in the Naval Reserve as a Lieutenant and a Doctor of Medicine. He started the war as a pharmacists mate. Your Dad, my Dad, Robert Heinlein and thousands of other guys; the Navy has a lot to be proud of.