Is Barack Obama altering his position on Iraqus interruptus from "surrender like the French at Sedan" to something closer to "peace with honor" or even "victory" (even if by another name)? If so, is he wisely and forthrightly changing his mind to reflect the enormous progress made because of policies that he opposed (which would make him much more attractive to many voters in the center), or is he blowing with the public opinion polls? If not, are the rubes the hawks toward the pivotal center or the anti-war left that nominated him and continues to fill his campaign coffers?

The answers to these questions actually matter.

MORE: A positively delightful picture and caption on the AP photo stream: 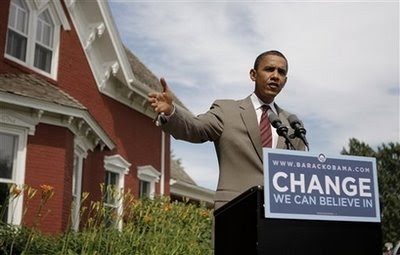 STILL MORE: Are the editors of the New York Times the rubes?

Yeah, let's hope he uses the word "Victory!" because that would make all of the right people very, very angry. It would also make Amadinijad, Chavez and Kaddafi think twice about endorsing his candidacy.

At this junction, I just have to assume this is a candidate with zero character or actual position. He have and will throw any supporters or political position under the boss if it advances his chance to go to the next level.

BigFire: I'll give him XP for defeating an ally in PvP combat, so his chances of going up a level are increased :)

Hmmm. If you are retarded enough to vote in the primaries for someone who promises to surrender US forces on the battlefield, does it make you more, or less, retarded to vote for the same politician in November when he's changed his position due to political expediency?
Are Obama supporters more retarded?
Or are Obama supporters less retarded?
Or to put it succinctly, Obama voters are more or less retarded.

The real rubes are everyone who voted for the guy because they thought he was a man of principle.

I think there is a way to formulate both of Obama's Iraq extremes coherently by turning 90degrees.
It's this:
When its hard, risking a loss, he's against it. When its easier, heading toward a win, he's for it.

No mystery at all.

It's just nothing that remotely qualifies as leadership.
Why? Being spineless when the going is tough will never let you turn the situation around to your advantage with tenacity because you're too busy trying to quit.

Note that there are no signs Obama is going to say he was previously wrong about Iraq.

Of course, all of the above is predicated on actually *believing* him. Next time I'm fully confident he'll cave when things get tough, thereby precluding any possibility of ultimate success.

The question is: Is there actually anything at all that Senator Obama believes in, aside from himself?

And if there is, how can you tell?

This is not the Barack Obama that I knew. Who knew that, really?

And is this whole discussion good for my kids?

Next up: Senator Obama throws HIMSELF under the bus; but will rise again afterwards, as prophesized.

All those folks under the bus now, I'm surprised the tires touch ground. Is there anything or anyone Obama won't sacrifice to get elected? Should Michelle be worried?

If elected, Obama will revert to form. He has been surrounded by leftists his whole life. As president, he will again surround himself with the most leftward staff and appointees he can get away with. Policy will be made based on the assumption that the US is the cause of everything wrong in the world and that working and middle class white people are the cause of everything wrong in the US.

He sure can read a speech though.

Mr. Obama is moved from the left to the center in this campaign so fast it is a wonder that he did not overshoot and end up on the porch drinking tea with Rush Limbaugh.

I commented on his fantastic campaign slogan here:
http://chrisofrights.blogspot.com/2008/07/barack-obama-change-we-can-believe-in.html

Barack Obama: Change We Can Believe In