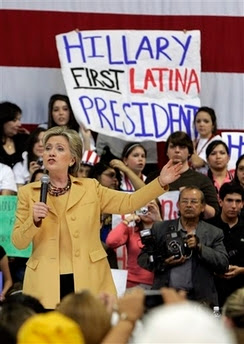 Hillary would be the first "Latina President"? Seriously? Isn't this carrying identity politics a bit too far?

As pukeworthy as it was to hear that Bill Clinton was the first "black" president, at least his comfort and acceptance among African-Americans was widely understood and by all accounts genuine. Does anybody think that either is even remotely true in the case of Hillary and Hispanics? Any Latinas out there who want to chime in?

Frankly, it is a crying shame that Hillary is not trying to grab the American Indian vote. Then she would be the first "Native American" president.

I'd love to hear what Hillary has to say on Nancy Pelosi's termination of the FISA law (that Hillary ducked voting on), in Spanish or English.

Hillary isn't going to be the first anything President if she doesn't start winning some primaries again.

This woman is so frantic to become president she will do almost anything. Except tell the truth, vote for tax cuts, give credit where credit is due, etc...

Agree with all above, but at least she can try. Hussein has captured 88% of the black vote because he is the first truly "black" President. But Hillary's black southern voice is better than her Spanish. Must be the practice time from the Oval Office helping Willy make decisions.

BEWARE BIG SISTER IS WATCHING YOU

While Hillary's political cynicism is a given, this isn't just about her. The reason she does this is because that's how you play big-D Democrat politics these days.

I recently switched my registration to Republican after having been a Democrat since I started voting 35 years ago. The second-biggest reason was the party's compulsion for identity politics. The biggest reason of course is the abandonment of national security policy to the Michael Moore wing of the party.

All political parties have special interests, but the modern Democratic party is a Frankenstein's monster of special interests and identities, not a common platform with general appeal to which several interests with overlapping interests belong. What general platform could possible appease both protectionist trade unions and internationalist academics, for instance? Or same said blue collar masses as well as gay/bi/trans interests or pro-immigrationists? And greens? And black racial champions? See where this goes?

The party gets votes by promising special treatment and goodies to all of its constituent parts, which is justified by the leftist intellectuals that drive the giant behemoth as just recompense for various modes and forms of oppression, all wrapped up in a "progressive" package. (which, I never tire of pointing out, is the same meaningless descriptor that the KGB used to identify Soviet sympathizers)

But it lacks any single, coherent driving idea(l) other than opposition to the Republicans. I'm amazed every year when it doesn't fall apart.