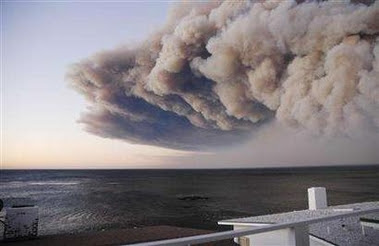 More homes are burning in "ritzy Malibu." I am ashamed to admit that my first reaction was to chuckle to myself. Then I thought that was a terrible response, one that I never feel when others are suffering. I will have to explore my feelings.

don't sweat it, you had a candid reaction is all. i live in socal, near a recent fire source, and i laughed at the (latest) malibu fires too. and next spring when they get mudslides i will laugh at that too. between now and then, they can laugh at me.

All right, gang, time for a pop quiz.

"A fast-spreading wildfire has destroyed a dozen homes in the mountains of Southern California's Malibu, the millionaire-filled community hugging the Pacific Ocean, fire officials said on Saturday."

First clue: It's a geographic error.

Second Clue: It's somewhat the opposite of a great Hugh Grant movie whose title starts with "The Englishman Who..."

The nearest mountains to Malibu are 500 miles away. :)

The article did, however, refer to them correctly as "hills" later on, so, compared to the movie "The Englishman Who Went Up A Hill But Came Down A Mountain," the author of this article seems to have done just the opposite.

Also, just for the record, the fire's not in Malibu, which is a seaside town composed of this stuff called "sand", not "mountains". It's in the hills above, and Birdie's right in that all we're seeing is the result of more enviromental pushback against cleaning out the dead growth.

(Is "dead growth" an oxymoron?)

As far as the schadenfreude goes, though, TH, that was probably just a gut reaction to the word "ritzy", and you would have had the same feeling if it had said the fire was in "Ritzy Blannerville". Americans don't like the word "ritzy"; it's in the same category as "posh", "elite", "snobby", and a host of others. Including one of your personal faves, 'conspicuous consumption'.

As far as the cause of the fire, I heard President Bush didn't sign the Kyoto Protocol which allowed global warming to arrive and forced illegal immigrants northward and they're the ones who started it.

IMO, these people have spent far too much on their homes, built in the wrong places and failed to prepare for the predictable situation. They are foolish and are suffering for their folly. When poor people are foolish, they frequently suffer for their folly, but we don't get amused by it. We just feel frustrated and look for ways to change the pattern of behavior. The folly and suffering are pretty much the same for everyone. It's sad ... and let's face it, it can be pretty funny, too.

I guess they don't have metal roofs and siding in CA, and nobody owns a brush cutter to could cut a 50' clear zone around the joint.

The dude who confused Malibu hills for mountains was probably fresh from New Jersey.

The "mountains" in question are the Santa Monica Mountains which rise to 3000+ feet above sea level (but just barely). The burned area is chapparal which loves to burn whether it is "dead growth" or live. Mostly it is very much alive until it is burned, of course and will grow back in just a few years unless the fire is really hot and then it may take another year or so. Great wildflower displays in the meantime.