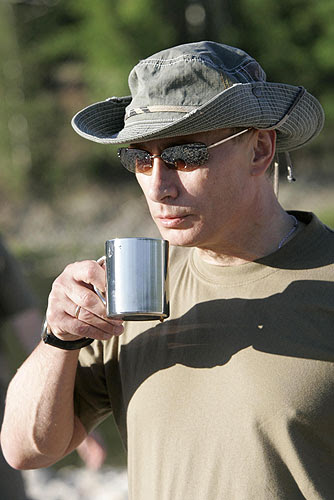 Even I have to admit, he's cool. Dastardly, but cool.

He made quite a media splash today in his shirtless photos from this fishing trip. Vlad Putin, sex symbol. Who'd a thunk it?

The chicks dig the Vladerator, no question.

Too bad we can't put him at the top of Republican ticket in 2008.

That would make an interesting four years.

How about the pipes on that guy! No wonder he thumbs his nose at the rest of the world! Not only does he have the world's second largest cache of nukes and other unthinkables, he could pretty much kick any other ruler's arse...

Revulsion is more the thought that comes to my mind, when I see pictures of Vlad. I think he's very strange, and I've wondered more than once if he doesn't have a touch of Felix Dzerzhinsky's issues in his makeup.

Even I have to admit, he's cool. Dastardly, but cool.

Putin may seem sinister to us at this point along the curve, but from the perspective of some Russians, he is doing what they wish of their DEMOCRATICALLY elected leader. That Democracy thing is not the magic hat that many wish it was.

Nice pic, but take any picture of Bush and Putin together, Bush almost always the better looking one.

To be fair, all those comparisons with Dzerzhinsky and Stalin are silly.

Interesting factoid. According to the most recent Pew survey, Putin is almost as unpopular as Bush outside his own country, particularly in Europe. However, Russians, unlike Americans, do not seem to care. Putin's domestic approval is over 80%. Interesting that foreign unpopularity does not hurt a Russian president, but does hurt an American one.

To be fair, all those comparisons with Dzerzhinsky and Stalin are silly.

Which comparison to Stalin and Dzerzhinsky do you believe is silly, Candide? Why?

Just look at the pics, 'andrew'.

Can you possibly imagine Old Communists looking and behaving like that?

My feeling is, we are mentally hamstringing ourselves by trying to understand Russians using memories of the XX century. We need to adjust and change, because they certainly have.

The Russians have changed? In what way have they changed? Not threatening other countries anymore? Not playing cold war games with U.S. bases? Or perhaps you meant British airspace? Certainly, the Russian government of today wouldn't murder exiled nationals on foreign soil, like downtown London, as they did in past times (you know, like the bad old 20th century). Things are different today as compared to the cold war, you might say, in at least the free flow of information. The BBC, for example, is now freely available in Russia. Oops! It's not anymore. Putin's photo ops are always very staged, but I do wonder sometimes at some of his odd actions around children, as vaguely reminiscent of old Iron Felix. Now, which thing do you think is silly? The Stalin part? Of course there's no real comparison to Stalin, since Putin's not busy building a cult of personality.

What, Putin kissed a child on a tummy?