A stroll down any row of the parking lot outside of Princeton's extraordinarily expensive grocery store -- McCaffrey's -- will reveal some car covered with lefty bumper stickers. This sort of thing is unremarkable to anybody who lives in a college town, but perhaps bizarre for those of you who do not. Anyway, I spotted this classic example earlier this evening and happened to have my camera in the front seat: 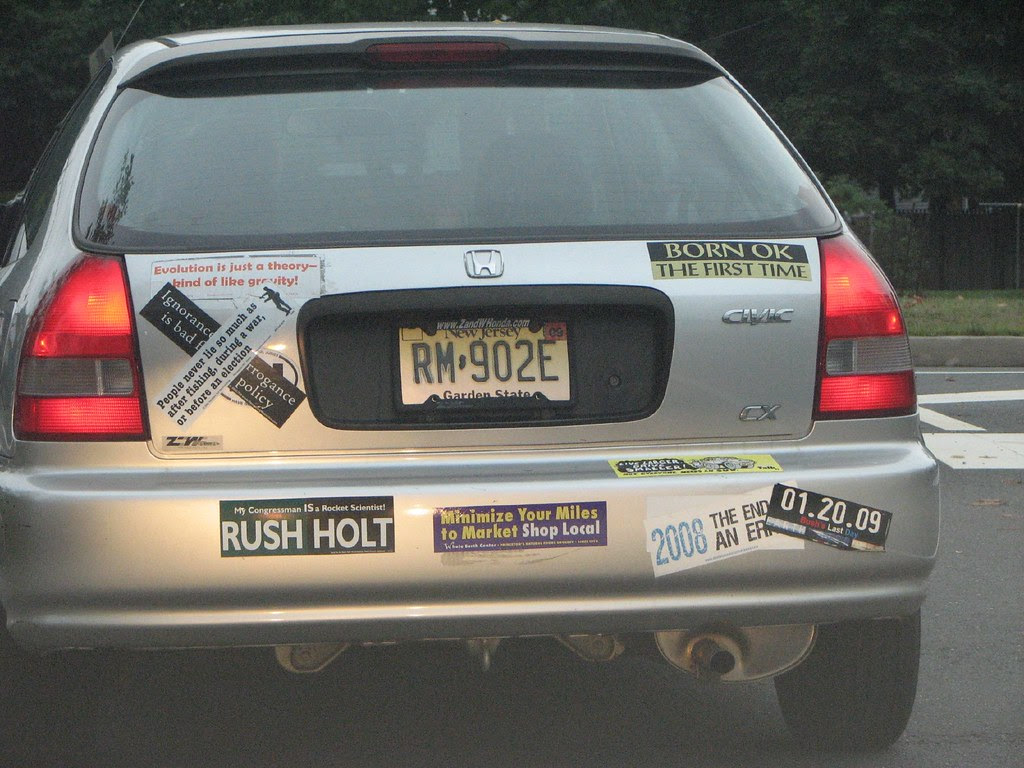 Click through if you need to inspect it more closely.

Occasionally one sees a righty bumper sticker, but only occasionally and apart from my own car I almost never see them in Princeton. However, I did spot this beauty in the parking lot across from the maritime museum in Mystic, Connecticut the Saturday afternoon just past: 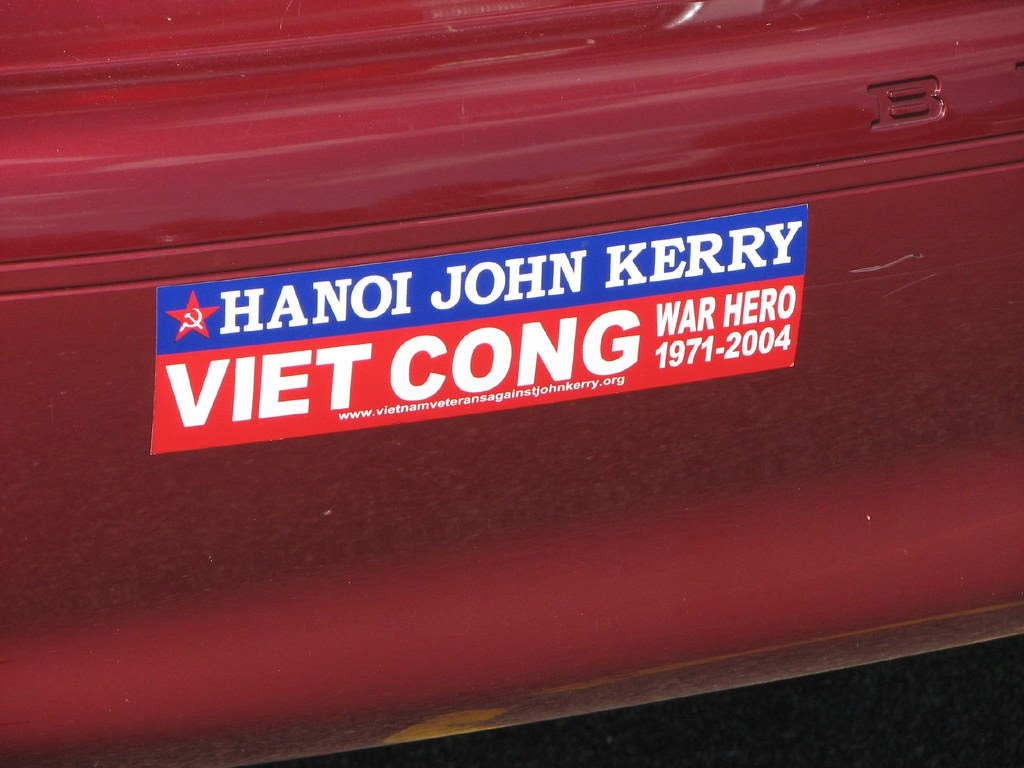 Even my wife, who really does not like John Kerry, thought this was in bad taste. But she laughed as she said so.

I feel your pain and though I do not live in a college town like Princeton, given my geographic location I see more than my fair share of “Dennis Kucinich for President” bumper stickers usually in tandem with “Save the Whales/Humans”, Visualize World Peace” and/or “Bake Sales for Bombers”. It does make one want to print one’s own bumper stickers to add to certain vehicle posteriors as the occasion arises saying something along the lines of “WARNING - MAINTAIN A SAFE DISTANCE. DRIVER OF THIS VEHICLE HAS COMPLETELY LOST HIS MIND".

For some reason, I can't quite read your license plate, but the 'lefty' car has their plate clearly visible ;-)

My blog. And, anyway, you know who I am, but we do not know who the person with the lefty car is. Makes all the difference.

Tell me, which bumper stickers on the car do you find so unreasonable?

"Evolution is a theory, just like gravity" - while this is probably overstating the case some, it's not by that much. The overall evidence in support of the "big picture" of evolution is overwhelming. The fact that some details are still under dispute does not invalidate evolution any more than the observations that the expansion of the universe is accelerating invalidate Newtonian gravity or general relativity as an effective description of gravity on anything less than cosmic scales.

"Born OK the first time" - this one is kind of silly, but not outrageous, and is in turn criticizing the silliness of some religious fundamentalist views.

"People never lie so much..." - I don't see anything particularly objectionable about this, unless you believe both the media and the president have been straightforward and "spin-free" in their accounts of the war.

"Ignorance...arrogance is bad foreign policy" - I think that's a valid criticism of the administration's prewar planning, which smacked of nothing if not hubris and ignorance.

Shop Local ... Live Larger, Drive Smaller - what exactly do you find so objectionable about this?

2008 The End of an Era, 01.20.09 Bush's Last Day - this person is clearly pretty happy that Bush soon won't be in office. Given the disasters in Iraq that have happened during his tenure in office, I can't say I disagree.

If this is your "classic example" of a lefty, I might agree with you. This person seems reasonable and well-informed about some scientific issues, at least, and desires a change from Bush's disastrous foreign policy conduct. This person drives a civic, an economical car which has low emissions, and exhorts his fellow citizens to do the same, as well as to "buy local."

Surely, you can do better at vilifying your political "enemies"?

Phrizz11, I'm not vilifying the lefty person. Indeed, the only criticism in the post is aimed at the right-wing guy. I do think it is interesting, though, that lefties tend to paper their car over with bumper stickers. You do not really see righties do that, at least not in these parts. There seems to be a real difference in bumper-sticker practice between left and right.

Well, yeah, but I'd suspect that is because the underlying populations (lefties/righties) have very different sizes. To be fair you'd have to compare Princeton, NJ with Houston, TX, or something like that, controlling for the percentage of people with lefty/righty political views, etc., etc.

So, good question. If you want around, say, Waco, Texas, do you see lots of cars with six or eight right wing bumper stickers? I admit, I've almost always lived in predominantly left-wing towns.

Actually there is a whole little museum dedicated to John Kerry in Hanoi that celebrates his contributions to their glorious victory... which sort of indicates that to the North Vietnamese, he was a hero, n'est pas?

Hard to argue that one. But someone will. Incredible.

The only vehicles with multiple bumper stickers in Texas seem to be Volvos, Subarus and Prius. Draw your own conclusions if they belong to lefties or righties.

A Texas observation. A friend of mine, who owns an ancient American brand gas guzzler, has his car plastered w Democratic Party bumper stickers.
I would agree that there are comparatively more lefty than righty multi bumper sticker cars.
I have a bumper sticker supporting Kinky Friedman's gubernatorial candidacy.

Phris11 said:
"Evolution is a theory, just like gravity" - while this is probably overstating the case some, it's not by that much. The overall evidence in support of the "big picture" of evolution is overwhelming. The fact that some details are still under dispute does not invalidate evolution any more than the observations that the expansion of the universe is accelerating invalidate Newtonian gravity or general relativity as an effective description of gravity on anything less than cosmic scales.

Evolution has overwhelming support from scientific data. The irony is that lefties like you accept evolution yet deny its implications. If you actually understood evolution, you would realize that pacifism is a silly superstition and humans ARE NOT good in heart.

Shop Local ... Live Larger, Drive Smaller - what exactly do you find so objectionable about this?

Me personally? No. But a Third World farmer dependent on exports to the West will find such parochial, jingoistic protectionism objectionable.