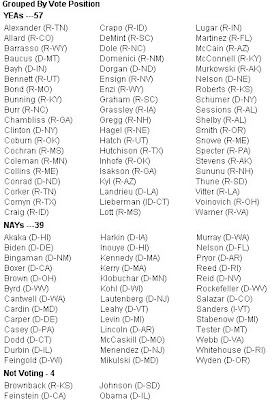 If you see somebody suspicious, do not report them to anybody in authority. Unless you are judgment proof.

The senators who voted Nay (click to enlarge) believe that if in good faith you report somebody for behavior indicative of terrorism and that person subsequently turns out to have been innocent, that person should have the right to sue you, the civilian who reported them.

Only seven Democratic senators believe that a good faith conversation with authorities about suspected terrorist-related activity should confer immunity from a law suit. Two of those Democrats are Hillary Clinton and Chuck Schumer. Obama managed to avoid taking a position. These three aberrations are not difficult to explain.

Just so we're clear, most Democratic senators do not (any longer) want to fight terrorists aggressively with our military, they oppose law enforcement officials taking actions to interdict domestic terrorism that they would not otherwise take against ordinary crime, and they believe that if civilians, acting in good faith, report suspicious activity those civilians should be subject to a law suit if they are wrong.

For those of you late to the party, this vote determines the fate of the "King amendment," which was brought by the ejected "flying imams" against the "John Does" who reported their suspicious activity to the airline. Background here, among numerous other places.

MORE: After reading this post, I think the Democrats are going to regret this vote. I can imagine the oppo advertising already.

It's not clear to me that the Senate bill does anything. It doesn't seem that this amendment would've prevented the CAIR lawsuit, which is alleging bad faith in the reporting.

A judge would probably have to allow such a suit to go to the jury, since it's the jury's job to determine the factual question of good faith.

The House version, on the other hand, protects bad faith and racist reporting which would preclude any suit on reporting.

A perfect combo of PC and concern for the trial lawyers.

Hope you're right on "living to regret this," but not optomistic. The "Nays" were all either not due for re-election for 5 years (Webb), there since the Republic was founded (Byrd, Kennedy) or from Moonbat States (Boxer, Kerry).

If a person is sued and it goes to the jury, I'm betting most juries will judge in Doe's favor...not that it is a comfort after you've spent your kids' college fund defending what you have....

re: my "living to regret this" comment - credit where credit is due, Michelle Malkin gave me the idea. Meant to credit it in the original comment, but got distracted.

Understandable that both NY senators broke ranks and voted aye. Indefensible that neither NJ senator did.

Where were all the did not votes hiding. Would their oresence have made difference?

The lightweight didn't even have the balls to vote, let alone vote as we all know he would've (nay).

Let's not forget that the junior Senator from New York, who wouldn't run for her current seat until 2012, is running for President, and voting "nay" would hurt her prospects in the general election, should she win her party's nomination.

Schumer I give a little more credit to for doing the right thing, since he's not facing re-election until 2010.

As for the Senators from New Jersey? Lautenberg is up for re-election in 2008, but Menendez doesn't face re-election until 2012.

Yes, this is clearly the problem we must guard against, "majority" Americans while doing their normal travel arbitrarily deciding to select an innocuous fellow traveller, perhaps a Catholic priest or a Chinese and delaying their flight schedule by making a bad faith report. Happens every time I take a flight.

I'm not sure what you're getting at anon, but the point of the law should be to protect people from the threat of lawsuits.

If the good faith clause is there (ie, everything but racially motivated reporting is protected), you lose the protection from the expense of a lawsuit, because every plaintiff will allege racism, and the defendant will have to shell out money. Even if it's just for a summary judgment motion showing that plaintiff hasn't met her burden, that costs money.

How do you prove motivation?

pattern hair loss on the vertex (top of head) and anterior mid-scalp area in men. Studies show that 80% of men experience improvement when taking Propecia.

gradual hair loss on the top of the head. Rogaine is a vasodilator. Exactly how Rogaine works to regrow scalp hair is not known. It may dilate blood vessels

in the scalp. This may improve hair follicle function and stimulate scalp hair growth.

to lose weight although on a diet. If Xenical is used with a healthy diet and exercise it has shown to help patients lose weight.

overweight patients who suffer from Type 2 diabetes and abnormal levels of fat in the blood. Sanofi argues that Acomplia can also prevent the risk of

Africa . These people may have, at times, consumed Hoodia on a regular basis. The San are known to have chewed on the plant during times of food scarcity, in

order to alleviate hunger and thirst.