Glenn Reynolds links to an interesting note about the impact of particulates on the albedo of snow cover.

The global warming debate has focused on carbon dioxide emissions, but scientists at UC Irvine have determined that a lesser-known mechanism – dirty snow – can explain one-third or more of the Arctic warming primarily attributed to greenhouse gases.

Snow becomes dirty when soot from tailpipes, smoke stacks and forest fires enters the atmosphere and falls to the ground. Soot-infused snow is darker than natural snow. Dark surfaces absorb sunlight and cause warming, while bright surfaces reflect heat back into space and cause cooling.

“When we inject dirty particles into the atmosphere and they fall onto snow, the net effect is we warm the polar latitudes,” said Charlie Zender, associate professor of Earth system science at UCI and co-author of the study. “Dark soot can heat up quickly. It’s like placing tiny toaster ovens into the snow pack.”

The study appears this week in the Journal of Geophysical Research.

Dirty snow has had a significant impact on climate warming since the Industrial Revolution. In the past 200 years, the Earth has warmed about .8 degree Celsius. Zender, graduate student Mark Flanner, and their colleagues calculated that dirty snow caused the Earth’s temperature to rise .1 to .15 degree, or up to 19 percent of the total warming.

Albedo is a measure of the extent to which sunlight is reflected off a given surface. Increase the albedo, decrease the warming. Light surfaces have significantly higher albedo than dark surfaces. Sooty snow apparently reflects much less electromagnetic radiation than pre-industrial snow (see the graph below for the albedos of various surfaces, including fresh and dirty snow). 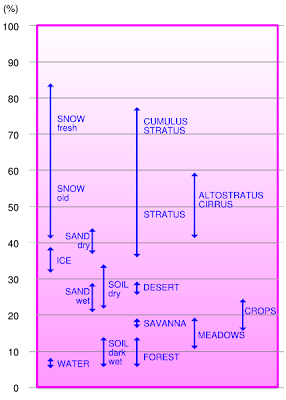 This invites the question, could we easily increase the albedo of surfaces around us to slow down the warming of the climate? The answer, it seems, is yes. By one calculation, if we painted all the world's rooftops white we would overwhelm all the anthropogenic warming to date:

The Earth has an albedo of 0.29, meaning that it reflects 29 per cent of the sunlight that falls upon it. With an albedo of 0.1, towns absorb more sunlight than the global average. Painting all roofs white could nudge the Earth's albedo from 0.29 towards 0.30. According to a very simple "zero-dimensional" model of the Earth, this would lead to a drop in global temperature of up to 1 °C, almost exactly cancelling out the global warming that has taken place since the start of the industrial revolution. A zero-dimensional model, however, excludes the atmosphere and, crucially, the role of clouds. [But!] It would be interesting to see if more sophisticated models predict a similar magnitude of cooling.

This seems like precisely the sort of easy, non-"hair shirt" adjustment that we should all take to mitigate the impact of human activity on the climate. Unfortunately, in many American communities (including mine) restrictive covenants or zoning requirements would prevent even the ecologically-minded homeowner from taking this simple step. The obvious libertarian answer is to pass a federal law that declares that any state or local law or restrictive covenant may not be enforced to prevent the owner of property from painting his roof or driveway to raise [Typo fixed - ed.] its albedo. The obvious Gorean answer is to require that all building owners paint their roofs (and, for that matter, driveways and parking lots) white by 2010, with an extensive government program to specify the type of paint to be used, an inspection regime to be sure that it has happened, and subsidies to be paid for by a new tax on the "rich."

Either way, we get the albedo down with virtually no impact on our standard of living. That won't satisfy the environmental activists who have an agenda beyond the mere reduction of global warming, but it should make the rest of us happy.

We'll all be happy, sure, except for the blinding glare coming off every roof and parking lot. I forsee a sharp increase in eye problems and car accidents caused by squinting drivers.

I would certainly not paint my shingled roof! So I would have to re-shingle it with white stone shingles or maybe re-roof it with white or silver metal roofing (if codes allow). Just wondering.. is the government or the Greenies going to pay for this? It's not in my budget.

The albedo effect is highly overrated. If melting ice and snow are what makes it warmer, how did the ice of the last ice age form after the ice from the previous ice age melted? Something had to cool things to get the albedo thing going in the other direction. People need to think about these things.

I looked up some earlier references to climate change and (30 years ago we wanted to avoid the next ice age) found the following @ http://www.aip.org/history/climate/RainMake.htm


"A more feasible scheme would be to spread particles in the atmosphere, or perhaps directly on the ground. Beginning around 1961, Budyko and other scientists speculated about how humanity might alter the global climate by strewing dark dust or soot across the Arctic snow and ice. The soot would lower the albedo (reflection of sunlight), and the air would get warmer.(7) Spreading so much dust year after year would be prohibitively expensive. But according to a well-known theory, warmer air should melt some snow and sea-ice and thus expose the dark underlying soil and ocean water, which would absorb sunlight and bring on more warming. So once dust destroyed the reflective cover, it might not re-form.


Russian scientists were not sure whether this would be wise, and scientists elsewhere were still more dubious. In 1971 a group of American experts said that "deliberate measures to induce arctic sea ice melting might prove successful and might prove difficult to reverse should they have undesirable side effects."(8*) As the respected British climate expert Hubert Lamb suggested, before taking any action it seemed like "an essential precaution to wait until a scientific system for forecasting the behavior of the natural climate... has been devised and operated successfully for, perhaps, a hundred years." (9)


Please note the suggestion that climate models be vetted for 100 years. But But AlGORE says we only have 10 years before disaster strikes.

Regarding the expense noted earlier, we all have to replace our roofs sometime and requiring all new or replacement roofs to be white would give us the bang spread over time so that we might judge the effects.
Regards

I wonder if covering Asphalt roads with light-colored gravel based sealants (i.e. http://www.wsdot.wa.gov/Regions/Eastern/ChipSeal/ ) would have as large a beneficial effect as all the roofs. I know they’re a lot easier to drive on, a wet asphalt road at night is like driving on an invisible surface. Seems to work for driveways too ( http://www.askthebuilder.com/127_Tar_and_Chip_Driveways.shtml )

Georg just said what I was thinking...

It used to be that roads were dirt, stone, occasionally wood, in the 20th century concrete. All non-black materials.

Standing on either in bare feet, is all the convincing I need that there is a significant amount of difference between concrete and asphalt.

Anon 1:04 pm - The point of such measures as painting roofs and driveways white is that measure would not have a significant impact on our standard of living. White roofs, even painted white shingles, look pretty in the sun. Ever been to Bermuda? It is just a question of getting used to it. From a regulatory point of view you could ease into it by adapting the "libertarian" solution (i.e., eliminating local restrictions as an obstacle) and the "efficient toilet" solution (i.e., requiring only that new shingles or roofs or driveways be white) so that the change would go in only when you are resurfacing or resealing your driveway or when you are replacing your roof. (This is essentially commenter JJ's solution.)

One obvious advantage of the "white paint" approach is that it is reversable. If Al Gore and his allies are wrong we can easily turn around and paint everything dark again. The point is to take the steps that alter our fundamentally awesome standard of living the least, rather than those steps that affect us the most. Painting everything white surely follows into the first category.

I don't find this compelling because it misses the distinction between generic white surfaces and white ice and snow. We don't worry about global warming because of its effect on global average temperatures. Rather, we worry that the greenhouse effect and the tendency of pollutants to darken the surface of icecaps (lowering their albedos) will cause them to absorb more heat, raising their internal temperatures and causing melting. Painting rooftops light colors largely wouldn't change that . . . even assuming that it might change the microclimate in urban areas (which isn't a terrible idea).

Just as a sort of, technical aside, the "greenhouse" effect was noted as a consequence of having confined air in a greenhouse heated by the re-emission of the full light spectrum (electro-magnetic, e-m) entering the greenhouse through the glass, and being re-radiated in only the infra-red (IR) spectrum (black-body emission), with the greenhouse glass being somewhat opaque (reflective) to that longer IR wavelenghth.
Likewise, the dark earth's surface is a "black-body" adsorber for all the e-m spectrum that is incident on the surface, and increased greenhouse gases (such as CO2 and 'shudder' water vapor) are more opaque to the longer wavelenghth light from the infra-red end of the spectrum; hence, "Global" warming. Without this effect, the Earth would be much colder and less hosptiable than it is today. Moderating reflectivity everywhere would seem to have some kind of overall effect in atmospheric heating.
Painting roofs white is an interesting concept to change the overall albedo of the earth's surface, but other colors could also result in different wavelengths being "reflected". And frankly, white shingles impregnated with a Titanium dioxide coating (the whitening agent in paint latex paint), might be made to work as low-efficiency solar cells, as TiO2 is photochemically active; for a few dollars more....

"painting his roof or driveway to reduce its albedo".

Should be"raise"?
Anyway, could have noticable effect in urban environs to reduce the heat loading and the "heat island effect". Lowers air conditioning demand which then lowers erengy demand and related emissions.
Not all "white" paints are actually low e in the infra-red, so need for specific compounds - like TiO2

Painting your roof white has a very local effect, it can slash or even eliminate your air conditioning power bill. So that's two sources of global warming gone in one, and it has a local benefit (more money in your pocket) rather than a local cost.

Yes, increasing the albedo of building's roofs and other covered surfaces by painting them in light colors would help. Mirrors on the roof would help even more, but the right kind of whitish paint is almost as good. In any case, by definition, any fraction of the radiation that is reflected is not absorbed, so the load on the air conditionning system under the roof would be decreased.

Further, if 30% of the solar energy impinging on a roof could be converted to power the A/C system under it, that would be enough to cool a single-story building entirely in the areas where high temperatures and bright sunlight happen at the same time, like most of Arizona and New Mexico for instance.

On the other hand, if the solar collectors are efficient, they would necessarily have a low albedo, since whatever was successfully absorbed cannot be reflected, as the converse of the above principle commands. To be completely neutral, such a system would need some proportional area of mirrors or white surfaces exposed to the sunlight in order to restore the balance of the whole system. If this was legislated, the required square footage of mirrors could be rented from companies specialized in albedo boosting, who would make a profit by maintaining mirror farms in areas with both good sun exposure and low land price, like deserts for instance.