Captionology: Give feedback to Glenn Reynolds!

Regular Instapundit readers know that Glenn Reynolds is at a secure, undisclosed location, and that he has handed the megaphone to Ann Althouse, Tom Maguire, Megan McArdle and Michael Totten. Tom Maguire -- who is well known to have an impish sense of humor, at least in the blogosphere -- has refused to confine himself to the traditional Instapundit posting format. Rather than beginning each post WITH CAPITAL LETTERS, IN the usual Reynolds style, Maguire has introduced his posts with mixed case bold. While refreshing (not to mention impish), Maguire's departure from protocol has obviously disrupted the wa of the blog. It is as if Maguire scattered black stones all over a carefully raked Buddhist rock garden. See for yourself (click to enlarge): 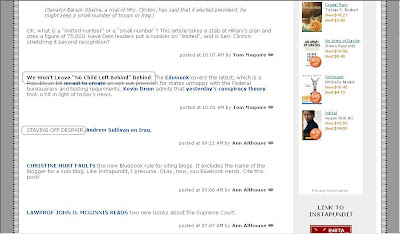 I, for one, believe that it is important for Glenn Reynolds to know whether his readers support Maguire's header apostasy, or prefer that he cling to the INSTAPUNDIT TRADITION. Herewith, a scientific poll designed to address this very question:

Looks like the majority just wants Glenn. I know I do.

I want each blogger to publish in their own font or color so that I can tell which voice I am reading.

Stylistically, moderation counts. Glenn expresses through excerpt selection, expressing his views about the size of serifs.

I really wish he wouldn't bother with guest bloggers. Because if you liked the guest bloggers, you'd already be reading their blogs (as he linkes to them often enough, they are hardly unknown to Instapundit readers)

And if you like the guest bloggers, then they are either blogging less at their place, and you have to read two blogs.

And if you don't like the guest bloggers, you still have to check to see if he's back. Whereas if no one posts, you can simply see from the RSS feed that there hasn't been any posts.

I know you realize it's a measure of the utter frivolity of the b-sphere that anyone notices, much less gets their pantyhose in a wad about this sort of thing.... but then you were fairly wallowing in amusement when you typed out this post, weren't you you??? :)

Loooong day. Man, and I don't even drink anymore. Maybe I should take it up again - I think my typing was better.

I can here this blog ALL..THE..WAY...DOWN...THE.. HALL-Just wait til Glenn gets back and hears about this.

Glenn has that style of could make a haiku seem wordy.

It's pretty unique, so why mess with it, even if he's away?

Glenn be the man.

This thread is lame. Time to move onto something else.

See if you can fit something in that will draw out the maybe-Muslim, that got a big response.

Heck you even got 5-10 posts about the use of a "U"..those folks had too much time on their hands.

But please, no climate change or the Presidents right to fire whoever serves at his please..unless it's about the WH chef. And please don't even get me started on string theory.