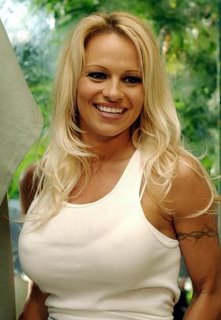 Pamela Anderson has finally realized that UGGs sheepskin boots are made of... sheep! From her "diary" entry of February 21, 2007 (photo at right for purely illustrative purposes):

I'm getting rid of our Uggs - I feel so guilty for that craze being started around Baywatch days - I used to wear them with my red swim suit to keep warm - never realizing that they were SKIN! I thought they were shaved kindly? People like to tell me all the time that I started that trend - yikes! Well lets start a new one - do NOT buy Uggs! Buy Stella McCartney or juicy boots - I'm looking for alternatives myself for my boys and the men in my life! I'm designing some right now for my family and will try and have some available on my website soon.

It's what I grab by my door in the mornings to bring my kids to school or walk my dog on the beach at 6am or anything early - I've definitely over used them - and that's it!!!!

Those things are leather? Say it ain't so!

Now I feel terribly about the UGGs I bought for my daughter when I was in Australia.

The Telegraph has an amusing photograph.

And, no, I don't go surfing around for Pamela Anderson stories. Jules Crittendon does, though!

Before DEC gets in his two cents, just glad that you are keeping us abreast of Pam Anderson's opinions.

If only they were brains. Sigh.

"Before DEC gets in his two cents..."

Sounds like someone woke up on the wrong side of the rock.

I recall that skit on the early saturday night live wherein Dan Akroyd was a slimy hustler and larain newman was a TV interviewer.

Akroyd was showing off his "whopping crane boots". Larain Newman said "There's only twelve of them left, how could you?"

I think even Borat could have told her where those boots were from.

I guess Anderson just wanted to remind the world that the species of clueless, aging blonde former sex symbols did not become extinct with Anna Nicole Smith's passing.

This is your brain on silicone.