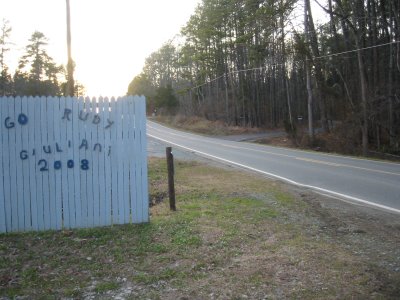 Good fences do not necessarily make good neighbors. Just ask Democratic presidential aspirant John Edwards, whose huge new home just outside of Chapel Hill has been a topic of no small amusement in righty blog circles.

Well, just one hour ago I received an email from a devoted TigerHawk reader who happens to live about a mile down the road from the new Edwards palazzo. It turns out that just across the road from Edwards' property there is an entirely different America -- one that supports Rudy Giuliani! Here's the description from our source:

I thought you might be able to have some fun with attached photos. This is on a fence at an abandoned commerical property, next to fields with farmland, some carcasses of barns and stuff, and a lot with junkers and projects for a mechanic's place. Directly across the road, you see two driveways, the one more in the background with a "McClean" sign along with the "no trespassing" sign. Those are the entrances to his property. Edwards probably digs the redneck/country thing, he being the son of a mill worker, and all that ...

I hope this sign frosts the Breck Girl each time he comes home.

Click on the picture to get a better view of the two driveways.

Edwards will start to feel like the vegetarian living next to the Hormel plant.

This is just like,,,so clever!

Gee, I wonder what kind of signs you can find outside of Rudy's mansion?

You would have preferred an incomprehensible double entendre with an allusion to Sartre?

I don't think cleverness -- at least in the sense I take you to mean -- is a major feature of presidential campaigns.

Umm, Tano, unlike Edwards, Rudy doesn't have a mansion.

Just think of all the starving appalachians he could have rescued with fundage from his compound construction project!

And they say that bloggers don't do original reporting??!!

Interestingly enough, I just found out that Rudy Giuliani AND John Edwards are both....lawyers!

Mr. Giuliani has been perceived and, and was, someone who worked hard to make NY City a better place, although he was perceived as a "Nazi" by many NY City public employees (I was occasionally in NY City utilities in the '90's, and Rudy's picture was routinely characatured with a swastika), and before that, in the '80's, a US attorney. I'm sure that he is "well-off" by the standards of most Americans, but John Edwards was a Personal Injury lawyer (frankly, the lowest of the low in the law profession, IMHO), and made millions off of.....chasing ambulances? All in that "other America", where they pay lawyers with a bag of beans or something like that. :)
Frankly, Edwards has not had nearly enough scorn and ridicule heaped upon him, based on his behavior as a "grown man". Let the ridicule begin.

"Interestingly enough, I just found out that Rudy Giuliani AND John Edwards are both....lawyers!"

Seems others are beginning to catch on!

Part of the legal industry! They never sell another out! Well rarely enough that it does not matter or register on the scale.

This is the industry that if destroying our nation! And I do mean destroying it!

This single industry Creates our laws, Argues the same laws, and finally judges the arguments as though it was some sort of college speech meet!

Edwards is a leach amongst the leaches! he stole his money from all working Americans. One client at a time, he made sure he got his FIRST! Well over 100 million dollars from our health care providers! Who in turn passed on the NEW cost of doing business to us the consumer.

He is nothing but a thief, and one that today is much too common. But a thief is what he is, just another con man in a suit of fine clothes you purchased for him to con you some more.

I for one am rather sick and tired of having lawyers in the position of creating laws, and for sure in charge of leading this country!

That's a sacrifice I'd be willing to make. (Michigan Law School, 1986)

With tongue in cheek, I was just trying to make the point that Rudy has mostly served the public with his legal career, while John Edwards has pretty much served himself. I truly fail to see any virtue in this guy. By comparison, Hillary and Bill Clinton look like paragons of public service, judging them by a 1992 pre-presidential viewpoint. They labored in the vineyards of Arkansas politics for years.

I know plenty of lawyers, good and bad. A good lawyer is worth his weight in gold to a client. It's just that PI lawyers are really the bottom of the barrel. Trusting John Edwards is akin to putting the fox in charge of guarding the henhouse.

"In every big transaction," said Leech, "there is a magic moment during which a man has surrendered a treasure, and during which the man who is due to receive it has not yet done so. An alert lawyer will make that moment his own, possessing the treasure for a magic microsecond, taking a little of it, passing it on. If the man who is to receive the treasure is unused to wealth, has an inferiority complex and shapeless feelings of guilt, as most people do, the lawyer can often take as much as half the bundle, and still receive the recipient's blubbering thanks."--

you lose weight. It works by decreasing your appetite.

from Sanofi-Aventis , exceeding Phentermine in it’s ability to help you lose the weight! It is a CB1 cannabinoid receptor antagonist ,and Its main avenue of

effect is reduction in appetite. Acomplia acts by obstructing the receptors, which control the food intake and energy expenditure - Thus resulting in reduced

version for the weight loss diet pill phentermine, and is used in combination with diet and exercise,to help you lose weight. It works by decreasing your

help people lose weight by acting on the appetite control centers in the brain. Studies have shown that using Meridia helps patients lose weight and maintain

weight loss for up to 2 years.

by your body. Orlistat is used in the management of obesity including weight loss and weight maintenance when used with a reduced-calorie diet.