What is going on in Kurdistan? 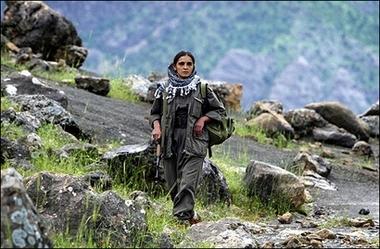 I wish I knew more about the Kurds, the game they are playing with the Turks and the Iranians, and our role in that game. The caption for the picture at right reads:

A Kurdish female Peshmerga fighter carries her weapon while walking in the foothills of the Qandil Mountains located along the Iraq-Iran border in May 2006. The PKK has ordered a unilateral ceasefire in its 22-year-old war against Turkey, insurgent commanders told AFP in their remote mountain base.

The news reports certainly look as though we put pressure on the Kurds to cool down their long war against the Turks. Why? Perhaps so that everybody can focus on Iran?

Debka was reporting recently that Turkey was starting to operate in Iraq against the Kurdish rebels in the North. Perhaps the US, fearing this could end badly, told the Kurds that they needed to stop their aggression for the time being.

I've also read that Turkey and Iran are cooperating against the Kurdish nationalists, who may see their long-suffering dream of a Kurdish state within their grasp.

I think if the Kurds don't overplay their hand and are temporarily satisfied to remain nearly autonomous within Iraq, the Turks and Iranians are likely to back off.

The PKK are hardcore marxists classified as a terrorist organization by the US and EU.

I doubt the mainstream Kurds want anything to do with them, or have much control over them.

Commie rebels are bad for business wherever they pop up.

PA, what you say may be true, but it doesn't address the question posed. Isn't it possible that the interests of the PKK and ours align in regard to Iran? If so, it makes sense that they might want to work that part of the equation, and we might want to let them. I'm not sure we would advertise the fact, but any such understanding between us and the Kurds would put subtle pressure on Turkey to lay off and accept what would amount to a truce. It may only be a temporary arrangement, but it would seem to work to everyone's advantage but the Iranian regime's.

Isn't it possible that the interests of the PKK and ours align in regard to Iran?

I wouldn't say unreliable. The USSR and pals made excellent, if simplistic, use of commie rebel types for decades.

They're more like, unsophisticated. Give em guns, point them at their 'oppressors,' and man look at em go.

The Kurds, like every other generally liberal culture, are complicated. The PKK are hardcore Marxist. Al-Ansar Islamiyah is a hardcore Islamist terror group. Most Kurds are much more moderate. That is why Israel has provided military support to the Kurds. Kurds are the largest stateless group of people in the world. The west did them a great disservice by not giving them their own state after WWI. We should support the creation of a Kurdistan without provoking the ire of Turkey. I don't know how best to do that, but it should be our goal. After all, like the Armenians, Jews, and other groups, an oppressed people deserve their own state in a place where they already live in substantial numbers.

Iran has stated its desire for the control of the northern Iraqi oil-fields. If the US can obtain a proxy, at no extra cost, then go for it.
Bi-lateral Israeli/Turkish trade and Military links are many, including proposed under-sea oil from Baku via Turkey land-pipe, Water, from the headwaters of the Tigris and Euphraties, Gas from Baku, etc from Turky to Israel. Onward pipelines for oil, across Israel to the Red Sea are mooted, for onward sea tanker to SE Asia. These activities will change significantly many power and economic structures in the Middle East. Israel for its part, maintains listening and intelligence souces on the N.E Turkey/Iraq border, and in Iraq, focussed on Iranian movements. Any move by Turkey may damage these. The PKK cease-fire with Turkey aids Turkey, USA, and Israel, and ties up Iranian capital and manpower. So long as PKK harrassment levels don't provoke a full scale invasion by Iran, and absent Turkish involvment they may not, then LET 'EM AT IT, and maybe give 'em a few untraceable arms!

If the US can obtain a proxy, at no extra cost, then go for it.

The "cost" is that marxist terrorists are impossible to control. A plausible proxy needs to be somewhat managable.

I believe we may have put pressure on the PKK to quit shooting in order to calm down the area. With ongoing troubles in Iraq, and Iran trying to bring things to a head with nukes, the fewer people we have shooting at each other in that region, the better.

Just a note to you guys. PKK are not "hardcore marxists", though this is the picture that Turkey and some other countries want them to have. PKK dropped the communist symbols in their flags in their fifth congress 1995 and has drifted away from marxism since then.

And yes, PKK has a substantial support among Kurds in Turkey, Syria and Iran. The fact that their sister party PJAK, is the only party in Iran that has a military force actually operating inside Iran is probably the reason why US forces has not moved against them

Another reason to not move against them is that 3000-4000 thousand guerillas in a rugged mountain terrain is not that easy to move. Especially not when the bulk of them are experienced guerillas that has fought against NATO:s second largest army for about 20 years. There is a huge difference between them and those who attack US forces in Iraq today.

Here are some links that may be interesting: