The South Koreans have evidence that the North Koreans did indeed test a nuke and are going batshit, as well they should. Screencap: 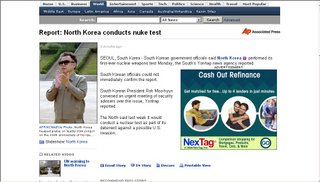 I have a long day tomorrow, and have to go to bed soon, so if you see confirmation or interesting details, please dump news and links into the comments.

UPDATE: In the write-through, the North Koreans just confirmed that they conducted a successful underground test.

MORE THOUGHTS: Will this push Foleygate off the front pages? The always-prescient Gerard Van der Leun predicted a North Korean nuclear test would do exactly that in Friday's Pajamas Media "Blog Week In Review" podcast (links here), although he thought a big media impact would have required an atmospheric blast rather than a boring old underground test. In any case, the New York Times will certainly blame the Bush administration for dealing with Pyongyang too multilaterally and do everything it can to get a sexual harrassment case back to top of the fold.

Another question: The North Koreans have humiliated China, which issued a statement on Sunday that a North Korean nuclear test "could not be tolerated." This is where we learn what kind of dragon China really is. Meanwhile, Japan is going to get even jumpier. With the war generation all but dead and buried, will this be the flipping of the switch in Japanese opinion that gets that country marching in a new direction?

UPDATE: (about midnight) Stratfor reports that it could have been a large conventional blast based on the seismic reports:

While it is clear that there has been an explosion in North Korea, it is still not clear at this moment how large it was. Very early seismic reports would seem to indicate that it was smaller than the Nagasaki blast, which was 20 kilotons. If so, it is not clear that this was a completely successful nuclear blast or an extremely large conventional one. Nagasaki was a 5.0 blast on the R. Early reports say this blast was 3.5, substantially smaller.

This reminds me that the North Koreans went out of their way to say that there was no radiation leak. Was that to point us away from arguing that the absence of radiation proves the blast was conventional? Still, people are pretty much assuming that it was a nuke.

Edward Vielmetti has found seismic data from a station in Inchon, South Korea that purports to show that something happened.

Its going to be a busy day tomorrow for a lot of people. Should have bought more gold before the weekend...

FOX News just said that the "USGS has detected no unusual sesmic activity in North Korea." I would put this in unconfirmed category. And I would not be surprised if they claimed they did just to stir the pot. Kim Jong-Il's teen-ager like temper tantrums/look-at-me-fits in the past have made a 'fake' test seem likely. Either that or the damn thing fizzled...

Never mind. Fox News is saying The USGS has announced they are looking at a possible sesmic event on the Korean peninsula.

There's a seismic monitoring station at Inchon; I blogged a capture here:

here is a link to seismic activity at Inchon with a current capture. That station's reporting shows only a 24 hr window from the monitor, but it's definitely something going on.

Scott at Speed of Thought is on this. He blogs a lot on sesmic activity around the word and hes is stating that the activity showing is for a quake in Tonga. Also, remember that the times listed on this are GMT.

in regards to the question, would the L-MSM drop the latest effort to undermine an election with Foley?

unless Nancy Pelosi was suddenly found typing some IMs.

a priority, a sincere problem, a serious threat, seems to have little importance to the partisans in the Media, and these wacky Democrats.

it is rather sad.

it would be fun, to have someone ask Bill Clinton a question now, about his Administration appeasing North Korea.

would he lose it again?
wag the finger?

More on the seismic angle: http://differentriver.com/archives/2006/10/09/nuclear-test-or-earthquake/