It must be serious, since he decided to cede power formally to his little brother, something that he has never done before. Let's hope that the quality of health care in Cuba isn't nearly as good as lefty apologists claim that it is. 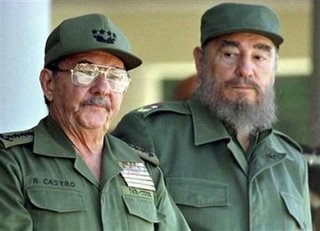 And, yes, I did just say that I hope Castro dies.

Here's a photo of Fidel and little brother Raul taken around five years ago. From the look on Fidel's face, you have to wonder whether he trusts even his brother. Maybe he shouldn't...

And, yes, I did just say again that I hope Castro dies.

So does this woman, who joined friends dancing in the streets of Miami's "Little Havana" last night. If Castro goes, Florida electoral politics may never be the same...

Here's another picture of Fidel looking much more trusting of Raul. The Agence France-Presse caption is both typical and priceless:

Cuban President Fidel Castro (L) is assisted to his seat by his brother Raul Castro, Minister of the Armed Forces, in Havana in December 2004. Castro, Latin America's sole surviving Communist strongman, has ceded power to his brother Raul on a temporary basis for the first time in 47 years, after undergoing what he called delicate intestinal surgery.

Really? If Castro dies, watch for Venezuela's Hugo Chavez -- Mahmoud Ahmadinejad's new best friend -- to try to take over de facto control of Cuba. That is why Chavez has been underwriting the Cuban economy to the tune of hundreds of millions of dollars a year. He is buying his way in.

I think Fidel is dead, and Raul is simply using this time to try and secure his hold on power.

TH, what's your view of the US embargo?

Castro's is on my short list of anticipated graves I'd most like to piss on, but the embargo doesn't make sense to me. Wouldn't we lay the groundwork for change in Cuba more effectively by giving the Cuban people a taste of life in the US via trade, cultural exchange, &c.?

I second Scurvy. I have never been a huge fan of the embargo, at least, since the Soviet Union fell. Greater trade will only show the Cubans how much they are missing out.

He just has some gass from decades of being a sh*t.
As for Venezuela's strong man taking over. Nope. All the son's and daughters of the land grant holders in Cuba who now reside in Miami will do a reverse Marilito invasion,set up Cuba as a gem of capitalism and it'll be party time in Havanna.
All the Miami Cubans want their homeland back plus they know the power of Adam Smith's economics.

Let's just hope this time the CIA doesn't put all the ammo AND communications gear on the same boat. That happened at the Bay of Pigs and contributed to the defeat of the invasion force. The ship was hit early on in the battle and sunk. The JFK pulled out of his promised air cover and that was the ball game...that and someone couldn't read a map and see that inland from the Bay of Pigs was marshland and mangrove..not the best place to manuever in a fight.
Go Little Havanna, take back Cuba.

I'm no fan of the embargo either, but the political power of the cuban community in S. Florida has kept anyone from trying to lift it.

I think a McDonalds on every corner could provoke regime change a lot faster.

Can we do this in Iran? Maybe some Starbucks and a Home Depot?

Good idea, Screwy. But in light of the "elastic loaf" development, Starbucks would have to come up with some new names. Maybe a "venti" would be "caliphate-size."

I also hope the pig dies.