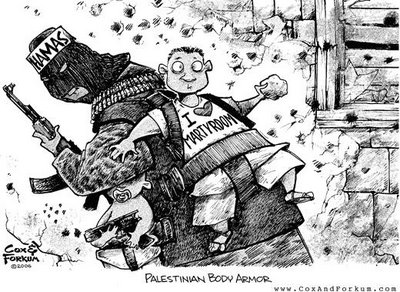 MORE: I put this up while watching the greatest trial movie of all time, Breaker Morant. It is the true story of the court martial of three Australian soldiers, members of a counterinsurgency special force called the Bushveldt Carbineers, during the Boer War. The Boer War, fought in South Africa at the beginning of the 20th century, was arguably the first modern civil insurgency and counterinsurgency, presaging the tactics, politics and moral considerations that have characterized such conflicts around the world ever since. It reveals that there is nothing new under the sun, not even the hot sun of the Sunni Triangle or the Gaza Strip.

The closing argument by Major J. F. Thomas, the defense attorney, is a remarkable summary of the moral and legal challenge in asymmetrical war from the perspective of the uniformed soldier sent to fight a counterinsurgency against an enemy who does not follow the rules of war (the text cannot give effect to actor Jack Thompson's riveting delivery):

The main fact of this case -- that Boer prisoners were executed -- has never been denied by the defense. However, I feel that there is no evidence at all for bringing charges against Lt. Witton, a junior officer who had no reason to question the instructions of his superiors, and whose only "crime" was that he shot a Boer in self defense. And further, no one denies the admirable fighting qualities of the Boers, nor, in general, their sense of honor. However, those Boers fighting in the northern Transvaal, in commando groups, are outlaws, renegades, often without any recognized form of control, addicted to the wrecking of trains, the looting of farms. Lord Kitchener himself recognized the unorthodox nature of this warfare when he formed a special squad to deal with it, the Bushveldt Carbineers. Now when the rules and customs of war are departed from by one side, one must expect the same sort of behavior from the other. Accordingly, officers of the Carbineers should be, and up until now have been, given the widest possible discretion in their treatment of the enemy. Now, I don't ask for proclamations condoning distasteful methods of war, but I do say that we must take for granted that it does happen. Let's not give our officers hazy, vague instructions about what they may and may not do. Let's not reprimand them on the one hand, for hampering the column with prisoners, and at another time, and another place, haul them up as murderers for obeying orders. Lt. Morant shot no prisoners before the death of Captain Hunt. He then changed a good deal, and adopted the sternest possible measures against the enemy. Yet there is no evidence to suggest that Lt. Morant has an intrinsically barbarous nature. On the contrary. The fact of the matter is that war changes men's natures. The barbarities of war are seldom committed by abnormal men. The tragedy of war is that these horrors are committed by normal men in abnormal situations, situations in which the ebb and flow of everyday life have departed, and have been replaced by a constant round of fear, and anger, and blood, and death. Soldiers at war are not to be judged by civilian rules, as the prosecution is attempting to do, even though they commit acts which calmly viewed afterwards could only be seen as unChristian and brutal. If in every war, particularly guerrilla war, all the men who committed reprisals were to be charged and tried as murderers, court martials like this one would be in permanent session, would they not? I say that we cannot hope to judge such matters unless we ourselves have been submitted to the same pressures, the same provocations, as these men whose actions are on trial.

The trial itself, which both direct testimony and flashback reflections of the witnesses' actual memories, explores the asymmetry of morality and law that haunts asymmetrical war. If you have never seen Breaker Morant, or have not seen it since you have had to think about Iraq and Palestine, you should do so at the earliest opportunity.

Breaker Morant is a stunning film and one of my favorites. This was the war that gave us kommandos and concentration camps. The film provides a fresh look at the morally challenging idea that new kinds of warfare require new rules and terms of engagement. Placing open cars with boer prisoners before moving locomotives to discourage the early 20th century equivalent of IEDs eerily echos the Hammas cartoon that begins your post.

It calls to mind the situation described in another gripping tale, Gwyn Griffin's "An Operational Necessity", based on a real event in WWII when a German U-Boat commander machine-gunned survivors from a torpedoed freighter to keep his position from being known by the allies. The verdict in both cases is the same, perhaps without the British Empire's need for scapegoats that influenced the Morant decision.