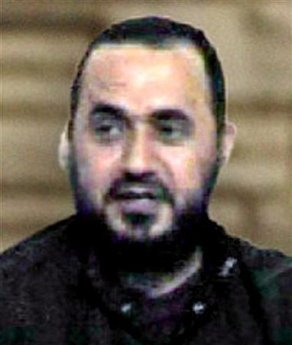 We have confirmed that we have killed one of the world's three most notorious terrorists, Abu Masab al-Zarqawi:

"Every time a Zarqawi appears we will kill him," Maliki said. "We will continue confronting whoever follows his path. It is an open war between us."

Casey said the body of Zarqawi, who had a $25 million U.S. bounty on his head, had been identified and that details of his death would be revealed later on Thursday.

As Michelle Malkin (who already has lots of links) says, "applause breaks out." In some ways this is better than getting Sadam, insofar as we managed to kill him from the air and avoid the hideous spectacle of a trial.

No, it will not end the war against al Qaeda in Iraq, nor will it stop the sectarian violence. It is, however, news in which any morally centered person should take great joy. My step is lighter today for no other reason than that this bastard is dead. Celebrate, just as this Iraqi woman is doing: 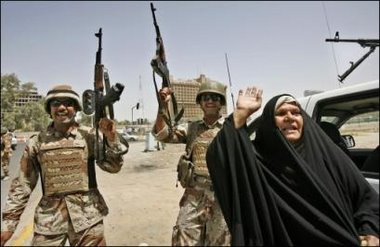 For a time, being the top guy in Hamas was very dangerous. Israel just kept killing them. I hope whoever takes over for Zarqawi isn't around as long as Zarqawi was; the job ought to be dangerous.

We should bury him with pig parts.

My thoughts here on my newly-resurrected blog.

Every time a Zarqawi appears we will kill him

Likely it reflects the attitude of the majority of Iraqis, and you gotta like that as well.

Zarqawi may have done more to unite and unify the new Iraq than any single other person. Only time will tell, I suppose, but he certainly at this point seems to have failed in his mission to foment sectarian war and turn Iraqi against Iraqi. (In that light, some people might want to re-assess what 'miserable failure' really means.)

This news spread like wildfire through the MI community and was the first thing I heard this morning. Everyone was in a good mood all day today.

Reminds me of when they nailed Saddam. But more gratifying.