The War In Pictures

Truth will come to sight; murder cannot be hid long.

"I'd never have believed it, had I not seen it with my own two eyes."

"A picture is worth a thousand words."

How often in life do we prefer the evidence of our eyes over what we hear with our own ears? After all, words can be deceptive. People twist the truth, beguile our hearts with honeyed phrases or pour subtle poison in our ears to make us doubt where we once loved. But what we see with our own two eyes must surely be the truth. Our eyes don't deceive us. They are an unfiltered and neutral recorder of life's ups and downs, its glowing victories and bitter defeats; those quiet moments of beauty amid the storms of daily events.

They are, aren't they? Of course they are. We can trust our eyes: 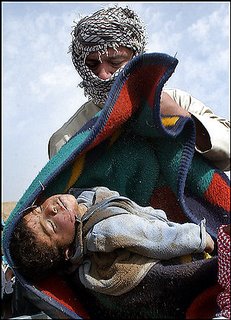 The most horrifying images are not published or shown on TV, though they're easy to find on the Web. But the ones we are confronted with are bad enough: A small child, a victim of a devastating and controversial U.S. airstrike in Ishaqi, is dressed in baby-blue, his eyes are closed, and his tiny, gently clenched hand rests by his side. He might be asleep, except that the photograph, which ran in Newsweek, shows a mangled, bloody arm next to him. The unidentified, shredded limb (does it belong to yet another child?) reaching into the center of the image might well stand for all the rest of these photographs that prick the conscience: They seem to come from the margins of our attention, they reach in and put their bloody imprint on a war that we wish had more innocence and calm to it.

The military has concluded that there was no U.S. wrongdoing in the March 15 Ishaqi attack that left the child dead.

But the photograph can't tell us that, can it? The damage, however, is done: the image seared into our brains, an indelible reminder of the innocent victims of war. The world will not forget.

We will not be allowed to forget. 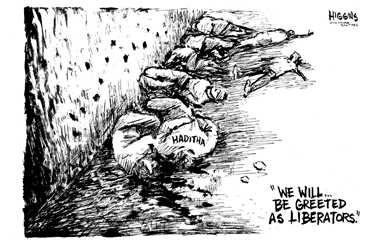 And the grim scenery of war continues to haunt us long after the words which give it context, or utterly fail to do so, have passed beyond recollection. Sometimes, we never learn the real story behind the photos burned into our retinas. Or we learn it too late, long after they have circled the globe, passing from newspaper to newspaper, from web site to web site; leaping like a juicy rumor from Inbox to Inbox on a million personal computers, replicating like a virus.

Photographs make us all silent witnesses to the tragedy of war. They bring the carnage into our living rooms: suggesting, urging us to act, tugging at our consciences, wrenching our guts, whispering that all is not well; that it can never be well in a world where babies bleed and their parents sit, numbed with overwhelming grief or wail out their agony and their anger.

They cry out for a justice that can never come quite swiftly enough, that can never assauge the pain that slices through our guts each time our eyes are confronted with the grisly reminders that war is, indeed, hell:

Photographs may play an important role in some of these investigations. But it is the degree to which the photographs exist in a world of their own, apart from the military's cautiously worded statements, that is increasingly perplexing. Throughout the war, the notion of two realities has dogged the warmakers. Is the president living in a world of good news and progress and missions accomplished, while our soldiers and the Iraqi population live in a world of chaos and death and uncertainty? Are the media presenting a world of antiseptic images, bloodless and vague, mere suggestions of a carnage they know all too well but dare not make explicit to the public?

We know, we believe, what we see, and the evidence of our eyes is compelling. But what of the evidence we never see? Has there been no single shred of decency to come from all the blood shed in Iraq and Afghanistan?

Where are the pictures of the schools and roads built, of children playing, of the thousand minor celebrations amid the chaos of war? Where are the moments of peace amid the chaos, the visual reminders of the progress we're making, the perspective that might stiffen our spines and straighten our shoulders? Where are the photos that could remind us why, for uncounted centuries, men have been willing to face the horrors of war, have been willing to kill, and bleed, and die so that perhaps one day, future generations may greet each new day without fear, shoulders unbowed, faces untroubled by the specter of sudden violence? Not on the front pages of our newspapers, that's for certain. 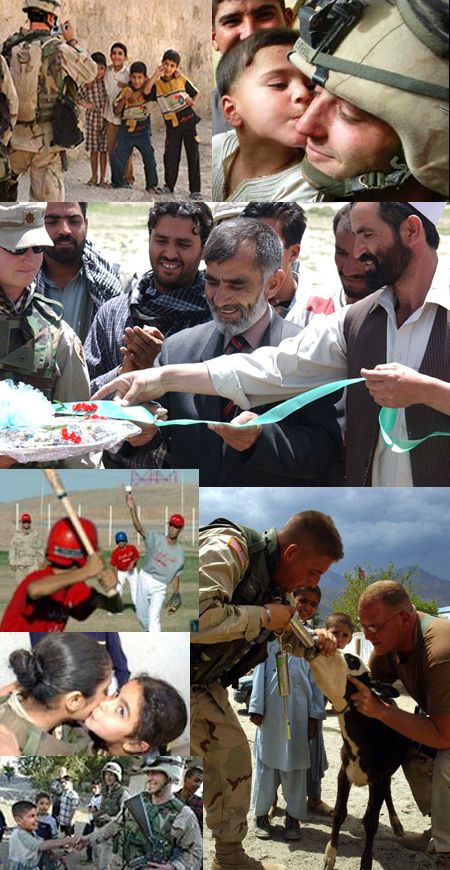 Day after day, the war passes before our weary eyes each day in pictures.

Pictures of Abu Ghuraib bow our heads in bitter shame, but there are none of Saddam's torture chambers to awaken fury and stern resolution in our hearts. No images of severed tongues, hands, ears; no women shamed and defiled, no silent scream of half-exhumed corpses in a mass grave, tiny femurs pointing like silent accusations from the dust of a once-great civilization. No bodies in free-fall, plummeting from a flaming skyscraper. No imam's shade twisting in a doorframe, his only crime that he dared to oppose desperate men bent on preventing the birth of a democracy. No child's forlorn corpse, its guts spilling out: turned into an obscene booby trap for the unwary soldier who stands with tears of pity dropping from his eyes. He reaches out his hand...

...but we don't see what happens next, nor the grisly obscenity that led to his death. We will see him only once more in this life, as one of the Faces of the Fallen, a testament to yet another one of America's humiliating failures.

Those are inconvenient truths, judged too upsetting for our eyes. We don't need to see them.

And so, in the end, what we are left with is an endless parade of horror, a veritable feast of death and destruction; of carnage and mayhem, cruelty and fear and grief all jumbled up like some obscene salad for our delectation. And we do feast our eyes. We can't stop ourselves, we are afraid to look and yet, transfixed, we cannot bring ourselves to avert our gaze. 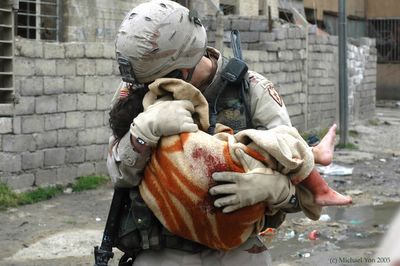 We can trust what our eyes tell us, can't we?

And the only image that fades, as the war grinds on, is the one with which we prepared for battle: the fantasy, so beloved of Americans, of a clean, surgical, decent war...

FUCK YOU! Have you ever been in combat, I mean real combat? No would be my guess!

One is forced to wonder whether Anonymous is a careful reader.

One is also forced to wonder if you may not be too cute by half with your tortured Swiftian lament. Give it up, Hawk. One Captain's Quarter is enough. We don't need two of you fogging up the shere with opaque rhetoric. Just another Anonymous.

Your articulate, well-reasoned response has completely changed my opinion on this subject. You're absolutely right: we should only learn about half what is going on over there. We'll all be so much better-informed that way.

I think your opinion makes sense. The real story of Iraq is terrifically complicated, and showing only the explosions doesn't begin to tell the entirety.

However, that being said, the place is a real mess. I don't adhere to the left-wing blogs and the corporate media for my news (as evidenced by my freakish fascination with this site), and I read about schools and quiet towns and commerce and such. On balance, in my estimation, the situation as a whole is fubar. The violence is esclating in some areas, diminishing in others, simmering in others. The place is a powderkeg, and our troops are at ground zero for any explosions.

Wrong war. Wrong strategy. Wrong turn. Never should have happened. Now...now we either wait for turd after turd to hit the fan, or we look for a way to get our guys out without leaving anarchy. It's all ugly.

The news media has some serious problems, as evidenced by the common carping on both sides of our political divide over quality and veracity, but the real problem is the policy. And the Bush administration has no plans to change that.

Thanks, Screwy. One of the reasons I've always liked you is that you will consider other points of view, even when you disagree with them. I am not under the illusion that I'm going to convince those who oppose this war.

I just try to articulate my side of the argument because when we go to war, there *should* be (and there was, and there has continued to be) debate over it.

I don't think shouting down those you disagree with is really the answer, nor is putting your hands over your ears because you don't like the message. I, too, read lefty sites all the time and though I am a passionate advocate for my point of view, I have admitted many times that reasonable people can disagree about the war.

I just want the debate to be an informed one, and military people really do believe, because we are constantly getting firsthand reports from our own people over there, that the public is not getting the whole story. We know that having the whole story might not coax those who oppose the war into supporting it because they may make different value judgments about whether war is "worth it".

But if we were all better informed, we would be making our decisions based on a more complete view of reality than the relentlessly negative view that comes through in the MSM.

Say it, Cassandra, though all of Troy think you rave. It takes courage to show the images of war in all their complexity and on their own terms. Mathew Brady did it with the dead at Antietam, and those at home saw the face of war as never before. You do not have to justify yourself, or that courage, to anyone.

on the same note, i posted pictures of dead iraqi children on scrutinyhooligans at the beginning of the war, when we were doing all of our precision bombing, and several member hooligans jumped all over me about it, calling it propaganda.

my point is lefty blogs are having internal and external debates as to what kinds of pictures should be posted, the reasons, the problems, etc.