Can al Qaeda do this? 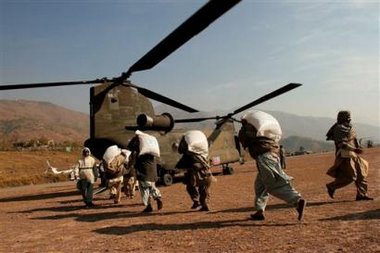 Workers carry wheat flour to an U.S. Army Chinook helicopter in Muzaffarabad, Pakistan, Wednesday, Dec. 14, 2005. As the harsh Himalayan winter approaches helicopters are delivering tents and food to villagers who have decided to stay on their land rather than go to refugee camps in lower areas. (AP Photo/Tomas Munita)

Americans and al Qaeda have something in common: we both have enemies that claim we are trying to dominate the world. But only one of these two imperial powers not only delivers food to Muslims in times of calamity, but airlifts it to people who decide to stay on their own land in the disaster area rather than avail themselves of local relief efforts. We Americans are great believers in both choice and the defense of private property, and are apparently willing to send our Army to accomodate that choice even in the relief of a natural disaster.

Are you kidding me?

But it's still the right thing to do. That's why I'm proud of my country despite all the asshats in Congress that keep running us down. We don't get it right all the time but we get it right more often than they do and we get it right a hell of a lot more than we get credit for (or anyone ever hears about).

I think you give the US too much credit by assuming humanitarian intentions here. It seems to be more of a strategic move than anything else, and while that doesn't diminish the importance of the aid, it makes us seem a little less benevolent. In other words, the means might not quite justify the ends in this case.

Undoubtedly this is just some kind of twisted psy-ops mission. What was I thinking - all these military types think alike.

I never said it was twisted, but when the military is involved in something, there's more often than not a strategic angle to the mission. At the end of the day, the Army's mission is to win wars, not provide humanitarian relief. I don't, for instance, think that this aid was provided because of some deep regard for private property rights. It's much more likely that the Army is looking to preemptively win the hearts and minds of the Pakistanis, to use a loaded term, in order to hedge their bets for any future conflict that might arise.

Actually part of the military's mission these days *is* to provide humanitarian relief. Where the heck have you been? Warfighting is conducted against combatants, not the civilian populace. At least last time I checked. And official DOD policy includes nation building in the DOD mandate, so you are wrong on the humanitarian relief thing. Read the papers.

Did it ever occur to you that when the military is in an area, they do not stop being human beings?

And I really am not sure what in the heck you mean by "the means might not quite justify the ends in this case".

Gosh, I'm just so confused here. Maybe we should just suspend all suspect humanitarian ops until we can have a soul-searching session.

The military's mission is to provide humanitarian relief only insofar as it furthers the primary mission at hand. After Somalia, the country's appetite for purely humanitarian operations was essentially eliminated, and that aversion remains strong today regardles of what the DoD might say publicly. When we provide food to people, it's not just because we feel like being good guys.

Hopefully I can clarify my position on this subject. Tigerhawk's original post clearly implied (if not explicityl stated) that the US is an imperial power with somewhat imperial aspirations. Assuming this is true, then, and following my position outlined above, the Army's humanitarian relief is at least partly aimed at imperial goals. Humanitarian aid (the means) is undoubtedly good, but that doesn't make imperialism (the ends) as noble.

There's no soul-searching necessary here. Let's just be realistic about why we do things instead of simply assuming the best and lavishing praise on ourselves.

I do not believe that the United States has "imperial" ambitions, if that word is to have any useful meaning. I was observing that our enemies claim that we have those ambitions. We claim, by the way, that al Qaeda also does, and they do not disagree -- they have said quite clearly that they want to rule the world.

The reference to "these two imperial powers" was meant to be sarcastic. I suppose I blew it.

Either way, I don't believe the US has imperial ambitions just because you said it, but that's a different argument. I'd only say that what I mean by imperial is perhaps different from the word's classic sense. We're imperial in the sense that we feel entitled to ignore the sovereignty of other nations in order to further our own interests. Even if it's a toned-down version of imperialism, it's cut from the same cloth as the more infamous examples.

Support Operations: Support operations are generally conducted to assist civil authorities in response to emergencies (natural or man-made disasters) or specified illegal activities, and to relieve or reduce suffering. Support operations meet the immediate needs of civil authorities or designated groups for a limited time until they can accomplish these tasks without military assistance. In extreme or exceptional cases, Army forces may provide relief or assistance directly to those in need.

Foreign humanitarian assistance operations are conducted to relieve or reduce the results of natural or man-made disasters or other endemic conditions such as human suffering, disease, or privation that might present a serious threat to life or that can result in great damage to or loss of property.

We do it because it is the correct thing to do. We have done it before, and we will do it again. It is a component of our doctrine.

Thank you very much, CPT Kaufman, both for this comment and what you do every day.