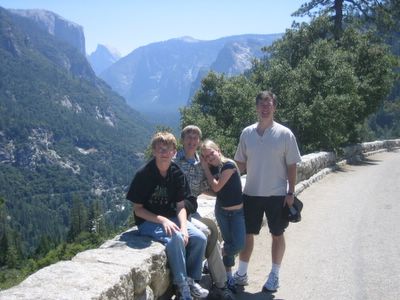 I've been too busy to report in detail on the TigerHawk family vacation, which started with a couple of days in Los Angeles and has now moved on to Yosemite National Park. I probably will report on the Los Angeles bit eventually, but the day in Yosemite was so spectacular I wanted to get the pictures up for friends, family, and anybody who loves the natural beauty of America's great national parks.

First up, the drive into the park from the southern entrance takes you through a tunnel that emerges with a spectacular view of the valley from the west. Here's the family with the valley and the famous peaks of Yosemite -- El Capitan and Half Dome -- in the background.

And, of course, without the family! This shot embraces the entire valley from the tunnel, including the glorious Bridal Veil waterfall on the right. 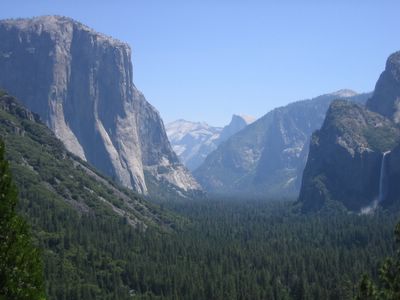 Later in the day we took a guided tour of the valley. Here's a picture of The Cathedral across a meadow, and following that is a shot of El Capitan, the largest granite monolith in the world. 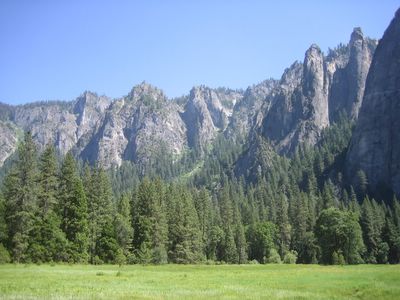 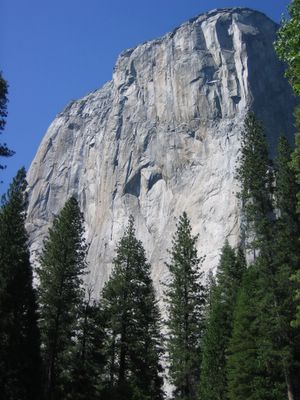 There were climbers all over El Cap this afternoon, which is not surprising given the season and the weather. It takes four to six days to get to the top. The climbers bring all their food and water, and sleep on an "artificial shelf" that they carry with them -- essentially a hammock that depends from fascinating devices that are wedged into crevices. I am terrified at the thought of sleeping in such a device against the 2000-foot sheer rock face, even if I could imagine making the climb otherwise. Absolutely astonishing. Oh. And they evacuate into a container that they pack out with them after they have reached the top.

Of course, you have to catch Yosemite Falls, which unlike the Bridal Veil runs dry later in the summer: 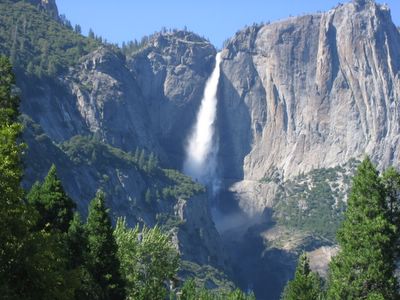 Finally, on the way back to our lodge at the south entrance we stopped to check out the Giant Sequoias, the largest trees in the world. 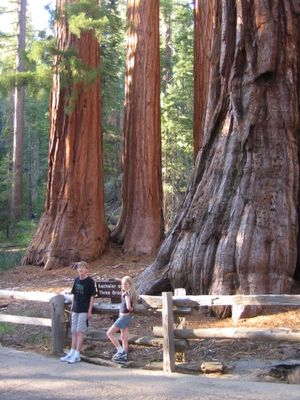 I must admit, having seen Yellowstone a couple of years ago and Glacier a few years before that, I was skeptical when my wife suggested that we visit Yosemite. How wrong I was -- it is a trip well worth making.

You are so incredibly lucky! I was at Yosemite a couple of years ago and we had the worst weather of our entire trip, everything clouded up and visibility down to less than 100 yards or so.

Have a great trip!

That's it. I'm going to Sequoia and Yosemite. Don't try to talk me out of it.

Have a great time!

p.s. Have you been talking to any Park Service employees about how Bush administration policies are affecting the park? Have they sold any timber or mining rights?

Sweet shots. I just got back from a trip to Mt. Rainier and Olympic NPs, as well as Mt. St. Helens NVM, and each is magnificent and awe inspiring in their own rights. The weather at Mt. St. Helens was poor, Olympic was mixed, but the weather at Mt. Rainier was absolutely perfect (though if there was a little less of a breeze, my shots of Rainier across Reflection Lakes would have been perfect!)

Holy shite!!! "Evacuating" into a container while on a hammock-like artificial shelf 2000 feet from the ground? Nope. Not for me.

The place looks quite spectacular enough from the ground.