All worked up over a little pushin' and shovin'

The rightosphere -- to which we proudly belong -- has been making much of this picture of a crying girl at Bush rally. According to press accounts, the little shreds of something in her hand are all that is left of her Bush/Cheney sign, it having been ripped up by a Kerry supporter. Leninists! 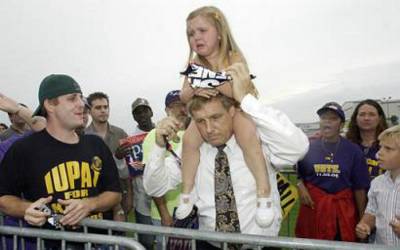 Of course, a quick troll through the leftosphere turns up this picture, which purports to be of a Republican trying to crush dissent at a rally at some point in the last couple of weeks. All the lefty blogs are, or at least were, in very high dudgeon about this (NewMexico4Kerry, a commentor at JohnKerry.com, wrote "It feels like we're spiraling towards fascism.") So the little girl was payback. Brownshirts! 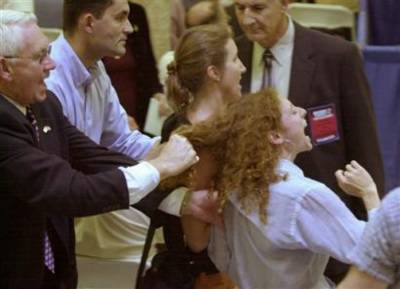 TigerHawk believes that we all need to get a little perspective. We have lots of people who are passionately involved in the election -- both as activists or spectators -- and somebody is photographing their every public moment so we can all wring our hands about it instantaneously. If there's a little pushin' and a-shovin', what's the big deal? The TigerHawk heart softens at a picture of a crying little girl as much as anybody's, but she'll get over it. Indeed, if her family has any sense of humor at all, her meany older brother will trot this picture out at her rehearsal dinner twenty years from now.

Believe me, you can tell when politics becomes too violent. It looks like this: 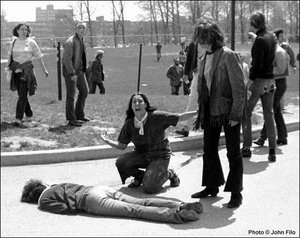 I wonder how many of your younger readers will have any idea what was happening in that last picture. Correct me if I'm wrong, but I'm pretty sure that was taken in 1970 at Kent State. Campuses all over the country were so chaotic that spring that I gave up on getting an education and enlisted in the Air Force.

Jack, if my memory's starting to go please email me at
bdfaith@yahoo.com and straighten me out, as well as adding a comment correcting my mistake. Otherwise I'm going to use that picture on my blog as part of a post linking to this one. You've done a great job of putting things in perspective and I want to make sure a few more people see it.

Silly me just saw the link to Wikipedia explaining the picture. I enlisted on my 20th birthday, 15 days after that happened.

I just did a spin-off post and linked back to yours.

I really love your blog!

I've bookmarked it and told my blogger freak friends about it. It's intelligent, sometimes funny and always refreshingly honest. Keep Up The Good Work!